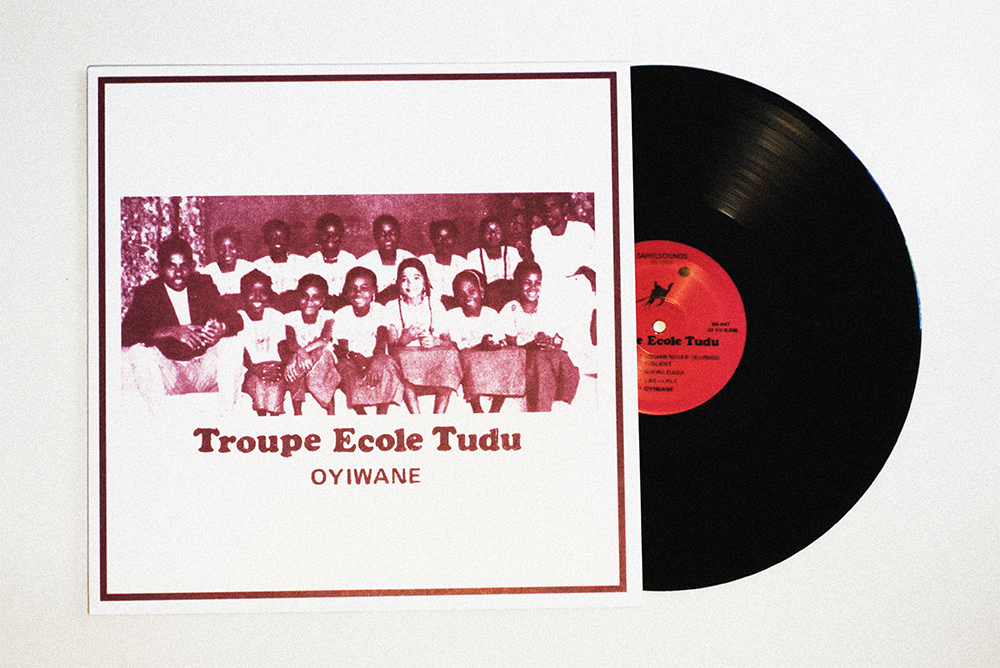 The debut album from Troupe École Tudu “Oyiwane” is now available, restored and remastered for the first time outside of Niger!

Troupe École Tudu (previously) take their name from a small neighborhood of Agadez, Niger. In 1985, the city hosted a musical competition between various schools. École Tudu, lacking a choir, sought out guitarist Kader “Barmo” Balla to lead the group. The guitar was new to Niger and Barmo was new to the guitar. His notes were minimal stripped down melodies mirroring the vocals, a technique common in Malian and Guinean folk music. To make something uniquely Saharan, they modeled their percussion on the tende, the traditional Tuareg goatskin drum and rhythm.

Their debut composition titled “Oyiwane” (“Greetings to Everyone”) won first prize at the competition, garnering the attention of the Niger state. The following year they were invited into the studio to record an album, released on the small boutique label Hasada (known for their seminal work with Mamman Sani Abdoulaye). The compositions mixed traditional folk songs with original creations, but the lyrical content was political. At a time of massive rural migration, drought, and exodus, their songs were a message to the modern nomads, emphasizing traditional culture while stressing the importance of education, particularly for young women.

The group continued to win accolades for their music throughout Niger. Following their success, a number of other school groups created similar guitar/vocal folklore groups. This style of music became popular throughout the late 1980s and early 1990s and led to the creation of today’s female music troupes of Niger.

Produced with the support and in collaboration with Kader “Barmo”, we’ve got additional full song translations & liner notes – you can download right here. Enjoy!