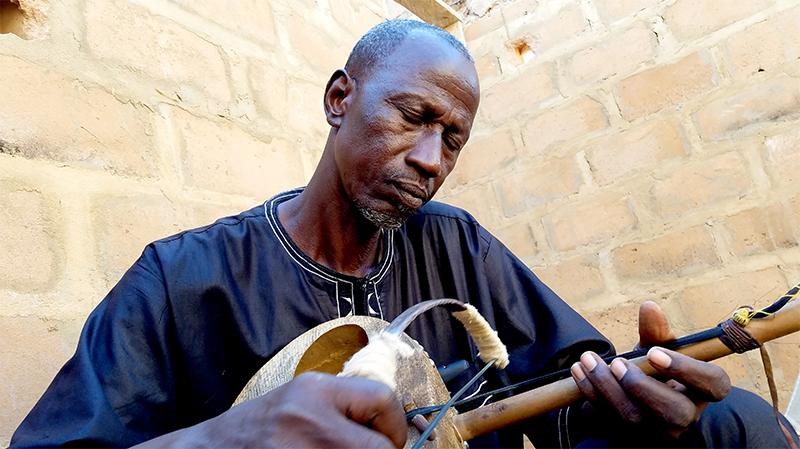 I come to Niamey looking for the supernatural. Fresh off speaking at a conference for the centennial of Jean Rouch, I’m inspired by this body of work, and I dedicate a week to Niamey. Compared to the other Francophone capitals (Dakar, Bamako), Niamey evokes the village. Most of the streets are dirt, carved out with giant divots from the last rainy season. Ancient trees burst through pavement in the center of town. Camels, loaded with baggage, shuffle along indifferent to the plumes of black smoke from passing motorbikes. Even amongst the hulking nouveau riche mansions of Bobiel you find the unmistakable rural signs of village life – guardians living beneath small thatched hangars, herders marching their cattle across the highway, and flickering of cooking fires in the shadows cast by streetlights.

Niamey guards its secrets well, but I hear a handful of tales. The giant serpent behind the Palais de Congress, slithering down to the river every Thursday evening. Madam Sabot of Goudel, half human half horse, who ate all the racehorses in Niamey until a Frenchman took her picture, pasted it around town, and scared her away. The old Nigerian priest who tells me of his grandfather, a hunter, who could transform into a fly, enter the nose of an elephant, and kill it from the inside. Above all, I’m searching for the Hauka, the Songhoy spirits of the pre-Islamic pantheon and possession ceremonies. In the Western circles, the Hauka are legendary, famously portrayed in Rouch’s “Les maîtres fous,” (Youtube), the 1955 short film documenting a small cult of Nigerién expats living in Ghana. Though spirit and possession are common across the Sahel, the Hauka are unique in their spirits, with a pantheon drawn from figures in colonial Africa. Rouch and others surmised the Hauka existed as a means of acting out power roles under colonialism. It’s understood that the Hauka “cult” thrived in post-colonial years, but its numbers are said to have dwindled away. I ask around, and no one in Niamey seems to know about Hauka.

One day, a friend mentions that his guardian sometimes hosts traditional groups late at night. “It’s like Takamba,” he says. After a winding taxi ride at the edge of Niamey we find the guardian, Malik, walking across the sand. Malik is Tuareg, probably in his late 40s with a friendly disposition, smiling and laughing a great deal. Helpful when you don’t share a language. Malik says he knows of a great takamba group, my friend translates. As we are turning onto the main road leading back towards town, he remarks that he was just at a musical event, but a “different” type of music, and I wouldn’t be interested. It’s a ceremony for the Hauka, he explains. We stop the taxi, and go back.

Malik leads me to the ceremony. In a dusty vacant lot, nestled between some the walls of new homes, a crowd is gathered. Four musicians sit on the ground in the shade of a small tent – three pounding on calabash, and one playing a goje, or horsehair violin – facing a much larger tent with men sitting in chairs. Between them, a dozen people shuffle along in a wide circle, in step with the music. Encircling the grounds is the entire neighborhood. Every now and then, a few people jump up to join the circle or to throw money to the musicians. I sit next to a wizened old man holding a cane topped with the silver torso of a horse. The men watch with indifference, barely speaking, looking almost bored. They’ve seen this before, or they’ve been here a long time or both.

Malik explains. The ceremony is organized to thank the Hauka for their services. A local woman was looking for work, she asked the Hauka for help. She got the job, and in return, she made this celebration. Over the next three or four days, the musicians will continue to sing the praises of the Hauka, while the neighborhood gives thanks to the services rendered. Sometimes the Hauka come and take possession of attendees. But this time, the Hauka don’t come. When they do, he says, you will know.

The next way we organize our own session, away from the ceremony (Hauka is sometimes perceived at odds with Islam, and attendees do not want to be photographed). We find an appropriate location in an abandoned house on the edge of town, where the sandy streets give a wide berth between houses. The group is led by Seini Lingo, a very serious older gentleman in all white with dark sunglasses. He’s joined on calabash by son Youssouf Mohamed and Saliy Kalleyssi. They play two long sessions, once with Mamoudou Amadou playing goje, the other with Issaka Moulla playing the monochord molo. The music is infectious and difficult. It takes a good amount of time before the confusion of the rhythm makes any sense, but by then I’m already deeply drawn in. Noticing I’m tapping my foot, the musicians begin laughing. “They say you’re feeling it, the spirit is coming for you,” Malik says. I don’t know if they are joking.

The next day, Malik comes to visit at my residence so we can work at translating the songs. We listen to the music, pausing the songs as he explains the corresponding Hauka mentioned in praise. But he tells me there are many more “There are even Hauka who speak Chinese,” he says. I transcribe it all, much to the chagrin of my friend and translator Rhissa, who is incredulous. We finish up, and I ask Malik how he knows so much about this world. He laughs and reluctantly explains. He doesn’t just attend the ceremonies but he helps organize them, serving as a conduit and a Hauka practitioner.

Before leaving, I tell Malik I want to show him something. I go to Youtube and find “Les Maîtres Fous.” Malik is ecstatic. He’s never seen the film before. “That’s Captain Salama!” he says, pointing at the screen, covering his mouth to hide his smile. He watches, nodding along, as the film verifies most everything he just explained. Rhissa slowly stands and walks out of the room, unsettled by the film, but also by Malik – who up to this point he had assumed was making everything up. We sit on the floor of the house in Niamey, watching the rest of the film, as Malik Bilali joins Jean Rouch in the narration.

the Hauka Pantheon (as described per Malik Bilali)

Arné (or Baki) – From Marseille. Walks like a drunk. When he doesn’t find wine, he taps the ground, and makes wine come out of it. If you’ve never drank before, when he comes into your body, you’ll drink.
Captain Salama – Father of all the Hauka. Speaks Tamashek.
Moshisé – The gambler. Speaks Groumantche. When he enters the body he lays on the ground and washes with sand.
Garba – Brother of Moshisé. Smokes cigarettes.
Bagambazi – Messenger of the bad. Drinks blood. If he enters you, you’ll do serious things – if you refuse, he will drain all of your blood. He is rare.
Gomina Ankaraze – Speaks French. Rich. Others will stop and salute him.
Sadji Boulou – Wife of Colonel Marseille, enters only in women. Speaks French.
Medina – Female sorceror, when she comes all stand at attention. The colonel will pick up and carry her.
Sergent Kadri – Drunk, from Marseille (all the Hauka from Marseille drink alcohol).
Fadimata – Young sister of Salama. Speaks Tamashek.
Corporal Guard – Husband of Fadimata. When he comes, military insignia will appear on the clothing.
Adiza – Doctor, and the daughter of the Malian President.
Doctor Soumalia – Husband of Adiza.
Captain Marseille – Boss of all the Marseillais.
Afulo – Pulaar. Comes wearing a hat and with a baton. 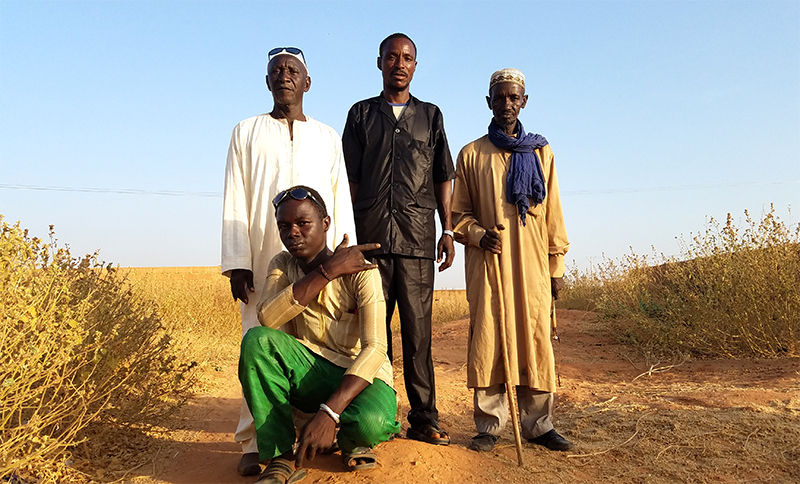