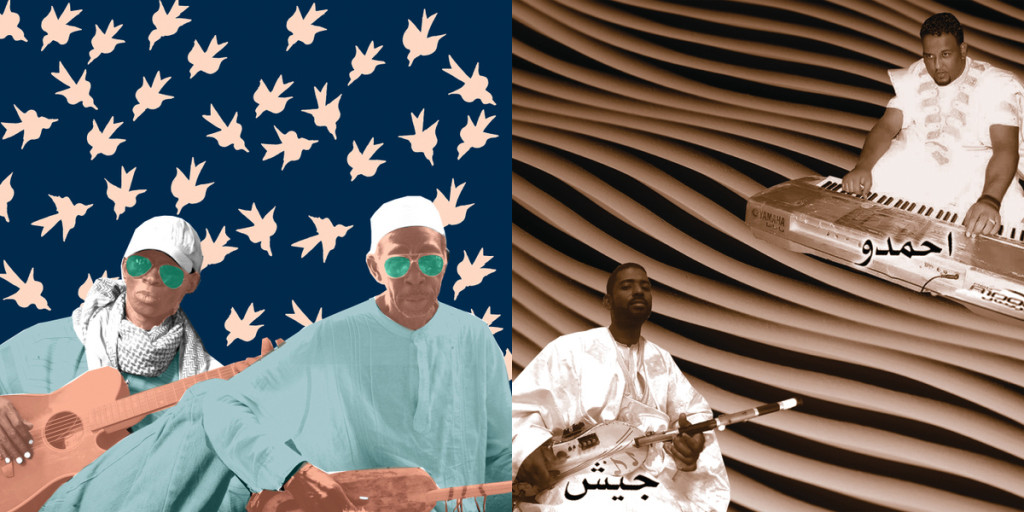 Starting off this new year with two new releases: Waande Kadde, dreamy acoustic Pulaar music from the villages of Fouta Toro, and Top WZN, synth, drum machines, and electric tidnit from the capital city of Mauritania. While they are immediately sonically different, they bear more similarities than one may suspect. Both are from the extreme West of the Sahel, geographically miles away. Both are improvisational sessions performed and recorded without any preparation. And both involve the meeting of the traditional and the modern, and the emergent new sounds that come from this encounter.

Tidiane Thiam’s and Amadou Binta Konte’s Waande Kadde, was recorded in the village by the same name – a tiny burg on the banks of the winding Senegal River, on the island of Morfil, in the extreme North of Senegal. Amadou Binta Konté is a fisherman, not a griot, but nevertheless plays the hoddu – a variant of the traditional lute found throughout West Africa. In Fouta Toro, the body of the hoddu is carved out of wood and goat or sheep skin is stretched over the resonator. The “strings” are made of braided nylon fishing line, and attached to the neck with small strips of leather. Tidiane Thiam, guitarist of the group Lewlewal de Podor, plays acoustic guitar modeled on the hoddu.

Guitar songs are played in a major scale (in contrast to the pentatonic scale of Northern Mali) in traditional Pulaar and Manding tunings. There is a common technique of playing with octaves and doubling. The contemporary guitar of Tidiane, while embodied in a different instrument, is very much bound to its predecessor, and nowhere is this more apparent than hearing them together. For our recordings in 2014, we traveled to Waande Kadde to sit with the two musicians in person. This is not the first time the two had played together, yet the music was improvisational. While both Amadou and Tidiane use different instruments, they play within the “folkloric” base, a wide repertoire of traditional songs that are shared across Senegal, Gambia, Mali, and Niger.

TOP WZN is a far cry from the mellow sounds of Waande Kadde – though geographically, it is only a stones throw into Mauritania (literally the other side of the river). The album (originally released on cassette in 2009) showcases Jeich Ould Badu and Ahmedou Ahmed Lewla, playing a signature genre of instrumental music. Transliterized as “alwazan” “wezen” or “wzn”, literally translated as “rhythm,” it colloquially refers to a contemporary genre of instrumental music, defined by synthesizers, electric guitars and lutes, and electronic drum patterns. Jeich Ould Badu is from a celebrated family of griots, and learned to play music at a young age. He plays the tidnit, the traditional Hassaniya lute – modified and updated, the goat skin replaced by flattened tin, and hacked together with phaser pedals and built in pre-amps. Ahmedou Ahmed Lewla is one of the most well known keyboard musicians in Mauritania. He plays an Arabic moded synthesizer capable of the quarter tone scales adapted from the fretless strings of classical Moorish traditions.

Popular Mauritanian music is often performed publicly with large troupes of guitarists, tidnits, synthesizers, and multiple rhythm sections. But in the past decade, the influx of small recording studios and a booming cassette industry has led to artist driven productions. WZN has followed suit, and has been transformed into an established genre. The slick studio sound, warbling tidnit, and microtones of the synthesizer are an integral part of today’s musical landscape, blasting from open air music shops and taxi cabs throughout the capital.

Both releases are now available on limited vinyl and digital download.