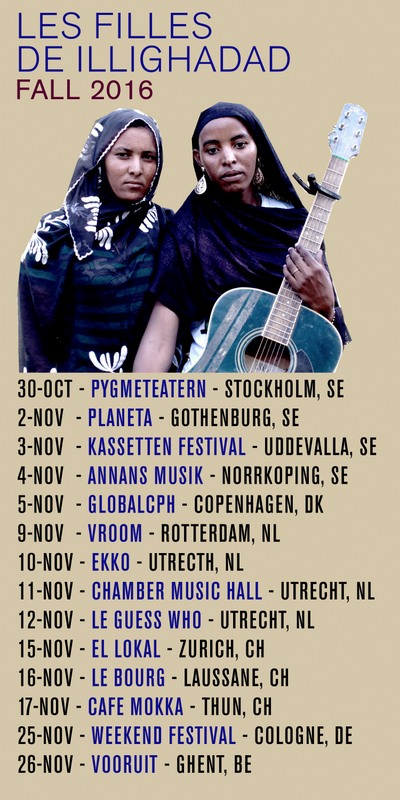 Les Filles de Illighadad arrived in Europe yesterday, and have begun their debut tour across the EU! The four piece, all hailing from the village of Illighadad in the region of Abalak, plays a combination of tende and guitar music.

Tuareg guitar music as a genre is increasingly familiar outside of the desert. But the origins of the music are in the tende. The tende (previously) is a water drum, formed out mortar and pestle, stretched across with animal skin. It falls into that designation as traditional, though I would offer “village music” as it retains a dominant role, particularly in the countryside; accompanying village celebration, but also a therapeutic and curative trance inducing music.

Les Filles de Illighadad differs from the multitude of guitar bands and tende troupes in their curious bridging of these worlds. Guitarist Fatou Seidi Ghali, one of only two female guitarists in Niger in a overtly male dominated genre, leads the troupe with songs adopted from the tende repertoire – making them one of the few groups to pursue this path. After 30 some years of ishumar guitar, it’s a curious and exciting development. As the band makes their first travel across Europe, Illighadad awaits with anxious ears.