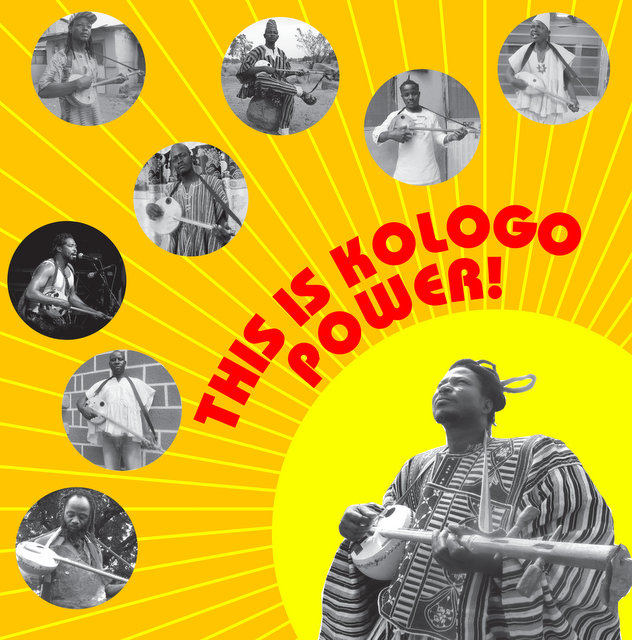 The Kologo is a lute from Northern Ghana. It is physically very similar to many of the other versions of the “tradi-guitar” in West Africa (hoddu, xalam, tidnit, terhadant, ngoni), but for it’s minimal design – a calabash, covered in goat skins, and boasting only two strings. The center of Kologo music is is Bolgatanga, a small city in the Northeast of Ghana, and ethnic center of the Frafra people. There are some 85 Kologo players in Bolgatanga, playing in some capacity at public events – in weddings, at funerals, and in the “pito” bars, a type of fermented millet drink.

Kologo music has a certain fierceness and intensity. The plucking of two strings is often evocative of something much more complex. While tenuous connections are often drawn between the American blues and West Africa, perhaps there is no stronger case than in the instrument itself. It’s oft cited that the Kologo, or a variation of, is the antecedent of the banjo in the Americas.

In 2014, Arnold de Boer and King Ayisoba began working together. Arnold de Boer is guitarist and vocalist for The Ex and the solo project ZEA. In 2014 he traveled to Ghana and performed on radio, tv, and raucous crowds. The Ex had spent years developing similar connections in Ethiopia over the past decade. While to sum up the tenets of the group’s aesthetic is didactic, suffice to say there is a strong element of punk and independence, existing outside of the a larger institutional world, and positioned for international collaboration. King Ayisoba is also well versed in the experimentation of cross cultural collaborations. Coming from a small village in the countryside and with a spiritual relationship with the Kologo, his career has progressed in his movements across the country. Moving to Kumasi and Accra, he began collaborations with hiplife artists and eventually brought the Kologo music to a wider audience in Ghana – singing lyrics in Twi, pidgin English, as well as Farafara.

In 2015, the two began to compile tracks for a compilation highlighting kologo music, with a variation of players and styles – but centered around the contemporary Kologo scene of Bolgatanga.

“The idea of making a compilation had been discussed on our European tours already a few times. In the van we listen almost solely to kologo music and there is no lack of great tracks. So together we started picking out the tracks we really liked. There was one dogma: “no computer beats”. King Aysioba wants to show what is the real kologo power and that is made by, as he calls it: “man power”.” – Arnold de Boer (source)

Sahel Sounds released a special version of the LP – a limited version for the North American market. The Sahel Sounds differs in design only; the cover is based and modeled on the popular style of West African record covers off-set printed in Ghana and Nigeria in the 1970s and 1980s. There is something ironic about re-contextualizing the record in another vinyl format that will most certainly not be exploited at home. Furthermore the record is now the result of a cross-cultural dialogue spanning three continents. It is difficult to tie culture to a particular place, and in an increasingly globalized world, cultural products (like music) become less bound to regions – whether Amsterdam, Accra, Portland, or Bolgatanga. Like the Kologo itself, whose origins in American blues is buried deep in the multiple translations over time, we’re reminded that culture itself is a conversation.

This is Kologo Power! is now available on vinyl from Makkum records. digital on bandcamp etc. – plus a special limited North American vinyl edition.

A wealth of information about the Kologo is available here.

Tags: ghana, this is kologo power

Field Recordings from the Sahel