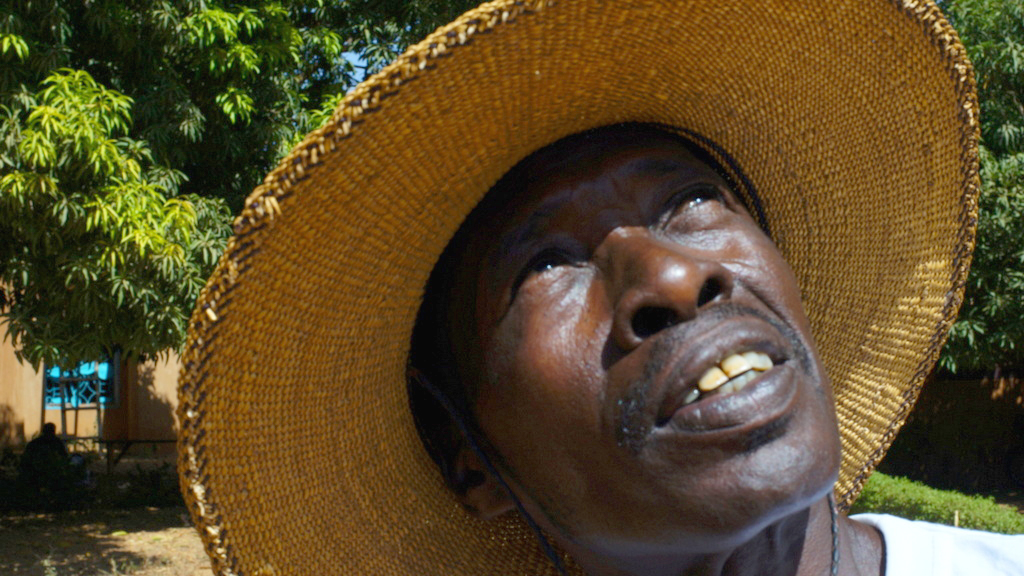 I found John Sofakole’s cassette in a dusty dark corner of the Centre de Formation et de promotion Musicale (CFPM), Niger’s formerly prolific center for modern music in Niamey. The CFPM once housed an active studio, and the archives read a bit like detritus of something grand and powerful that doesn’t quite match up with the vision of today. I had heard John’s name before in the stories of other musicians, but these were the first songs I had heard. As is the case with most the history of popular music in Niger, nothing is written, little is recorded, and the legacy of the artists of the past decades mostly survives in the memory of songs.

We meet up at the same center, sitting under a tree in the courtyard. John tells stories between the songs, and recounts the old days. John Sofakole, real name Abdoulaye Halidou MaÃ¯guizo, grew up in Dosso, a town just south of Niamey. It’s from here that he takes his name. In 1989, John won the Prix Dan Gourmou, a prize established a few years prior to award the burgeoning scene of “modern music” in Niger. His song was titled Sofakole, and recounted the story of a lake in Dosso, haunted by a djinn.

Sofakole is a song about a seasonal lake near Dosso. It’s an old sacred place called Fada Bongo, an enchanted lake inhabited by a djinni. Each six months, the people of Dosso made sacrifices to the lake: chickens, goats, and all sorts of animals, preferably with black fur, would be sacrificed at the lakes edge. The meat would be shared and consumed by the people. The lake could have the blood. The sacrifice was an obligation to the lake, like most lakes possessed by djinn or Mami Wata, an observed ritual ensuring safety. In the rainy season, the water would grow into a deep lake, and if the sacrifice wasn’t made, it would swallow up whomever entered.

John’s brief rise to fame brought him around the country, joining with other stars like Ali Djibo and Guez Band, and eventually he ended up traveling abroad and performing in Japan. For most of the Nigerien artists of the “modern music,” there was a brief moment in the 1990s that contemporary music seemed to have government support and interest, particularly in the development of the CFPM, a government sponsored music institution that now is a shadow of it’s former activity..

Like the CFPM, the lake of Sofakole is no more. What happened was this: one day, the djinni swallowed up the son of a powerful fisherman. The child had traveled to Dosso for a school course, and was playing in the lake when he disappeared into the lake. The father, incensed that the djinn would have the audacity to make such an error against the son of a fisherman ordered it to leave. “And the djinni left. It’s still in the region, hiding somewhere. Today there’s no water,” John explains. “There’s some water maybe below, but not like before.”