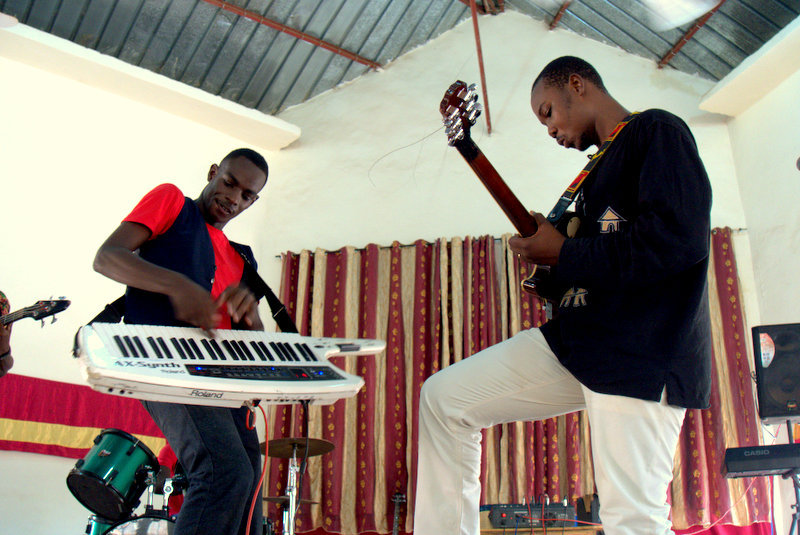 For sometime I’d been on an elusive search for the West African metal musicians. It appeared that metal didn’t exist the Sahel. Enter Shine. Band leader Daouda Dao is a professor at the Arts Conservatory of Bamako. It’s Bamako’s art school, with active theater courses, plastic arts, visual arts, and music – an impressive attendance of students making all kinds of amazing media. Anyone looking for a place to meet/collaborate/launch art projects in Mali needs to know about this place. But I digress. When I meet Daouda finishing up one of his courses, he tells me that he’s in a metal band, and I immediately drop everything to set up a rehearsal.

Shine’s music is unlike anything else in Mali. For one, there is a Keytar in the band. Also, Daoudo plays the guitar with his teeth and Van Halen inspired two handed guitar tapping. It sounds like nothing I’ve ever heard in Mali, or even in West Africa. The range of influences is vast – blues rock, Hendrix, and the aforementioned “metal.” Perhaps it’s the driving rhythm guitar and the deadpan vocals, but I almost hear some Joy Division.

Mali is an overwhelmingly Muslim country, around 90% to the 1% of Christians. Churches are sparse throughout the capital city and much less visible than their brethren with towering mosques and their synchronized calls to prayer. Suffice to say, there is no problem here between religions, and Mali is a place that prides itself on pluralism. Shine is made up from these churches – each band member in their respective church band – and their music contains a religious message. Perhaps because of this status as religious/musical minority the band is less bound to the more popular sound in Mali, and can experiment in the fringes. Into Metal.

We record the session at a church in Sabalibougou, a suburb of Bamako. The wide space and arching metal roof distorts the sound into reverb oblivion – not an ideal venue. It would sound better with a full church, but it’s empty for now. After five songs or so, everyone quickly departs for their other bands, choirs, and jobs. I’m not sure what I heard, but I want more.

Shine is featured on Uchronia: The Unequivocal Interpretation of Reality