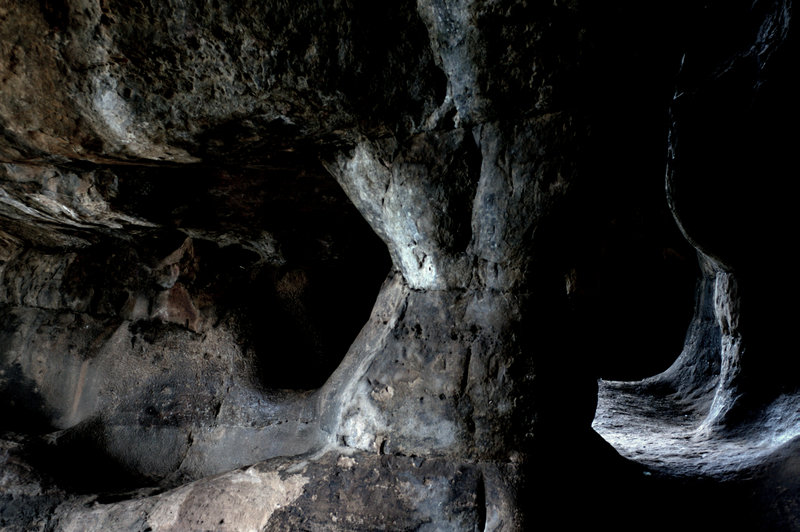 Missirikoro is a small village south of Sikasso. It’s only 12 kilometers away, but the road is all red dirt and rocks – unpaved, but heavily traveled. As you approach the village, you can see the strange mountain rising above the tree line. It is a small cylindrical formation that seems to have been dropped out of the sky. There are some young men standing in the forest when we approach, and they accompany us up the hill. Inside the mountain are a series of caves. The biggest chamber is about twenty meters tall. Various indentations mark the floor – the place where the ancient ones prayed, carved out spaces for giant knees and feet, or the crescent-shaped divot where a woman and child once lay. The cave walls are curving, and the light from the opening high above flows down them in a river of shadow. It smells of incense and the cave ceiling is waxy and black from smoke. Hidden in the small annexes and corners, people are praying.

This is an ancient place with ancient magic. The place is special with Djinn. There are various caves for Muslims, Christians, and animists, all who come here to make sacrifices. You come here to pray and you make a promise to the cave. If it grants you this, you must come back and fulfill the promise. I hear dozens of stories of those who negated their end of the bargain and paid in various ways. It’s said many years ago, anything you felt the need to eat would be waiting for you when you arrived. But it was ruined when a man didn’t believe the cave. He thought it was some sort of trick, so hid and watched to see where the food came from. A young girl djinn came carrying the food, and when he spotted her he cried out. He tried to leave but turning into the cave, he became hopelessly lost, and is somewhere still, perhaps, in secret passages underneath.

I go back into the main cavern to have a moment, alone. There are three people in the various chambers with me – a man lying on a prayer rug with a Koran, a woman in white hidden on a ledge over the animist cave, and another man, disheveled and unkempt. It is not all silent. Birds flutter and make strange cries, bats swoop through the darkness. Strange insects with long antennae crawl on the floor. The ground is cold. The air is cold. The earth is still. It reminds me of the cathedral in Tarragona, the curves and symmetry, the private chapels, the underground crypts, the divine ceiling. This is a cathedral. Or the cathedral is a cave. Is it so unlike the places where the first people worshipped? The cathedral always carries with it a narrative of the power of man to build the structure in the name of god. But this chamber is something different. It is built by god and djinn. It may be alive itself.

The lack of written history is cited as a tragedy, and we work to find and preserve elements of tradition that may be lost to history. But absence is also power. Historical explanations of the caves of Missirikoro might tell us when the first people came here, how they worshipped, why they came to see the caves this way. They could say which stories are ancient, which were altered over generations, and which are modern innovations, sprung from imaginations, boredom, and speculation. But we have nothing like a library here, only words. With nothing to look to, with no explanations of when or how a story began, we are left with only the stories themselves. And all the stories are equally true. We are left with only the sacred.

Libyan Reggae and the frauders of Agadez