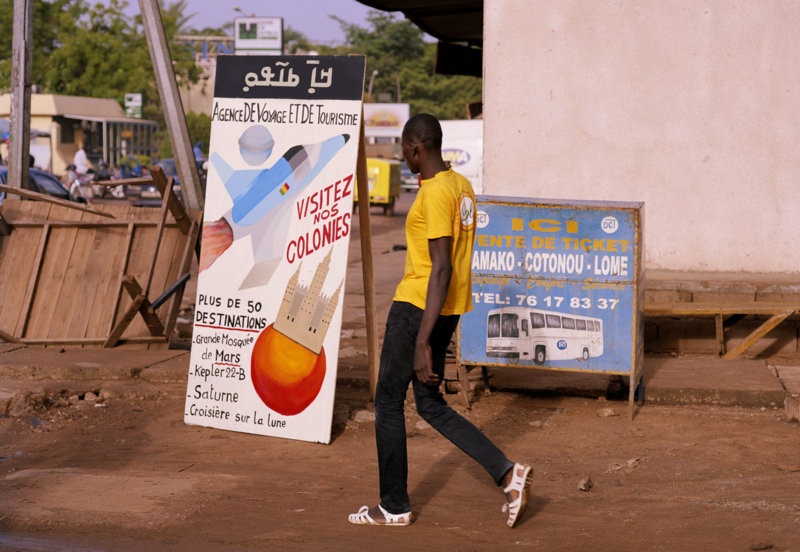 The work was semi-ethnographic documentation of travel to a fictional Bamako. Over 10 days, photographer Maciek Pozoga and I meticulously documented the real and the unreal through photo and sound. The imagined capital evolved out of discussions with Bamakois: visual artists, science fiction scenarists, traditional griots, DIY filmmakers, and modern studio producers. At the forefront was the perception of Mali and its capital – what it is, what it could have been, and what it will be. At the core was the idea of travel, that feeling of being in a strange land. On this journey we looked for clues of alternate pasts, hidden in architecture, dress, song, or deep in the dreams of possible futures.

The resulting exhibition, Uchronia: The Unequivocal Interpretation of Reality will feature photography from Maciek Pozoga, a photo book, edited by Pierre Hourquet, and a vinyl record of field recordings documenting the journey – available during the exhibition (and later here at Sahel Sounds). The vinyl record, “Field Recordings from Alternate Realities” accompanies the photographs as soundscape to this unrealized world. The record draws on the experience of a number of musicians, including Mamelon, Luka Productions, and Super Onze – borne out of conversations and experimentation.

In the studio with Luka Guindo, we listened and discussed mp3s of Craig Leon’s Nommos. Released in 1981, Nommos is a concept album based around the “Dogon creation myth” – a much-referenced story that the Dogon tribe’s mythology was based around impossible astronomical knowledge, and that this knowledge must have come from the stars themselves. Leon composed the music New York after encountering Dogon art at the Brooklyn Museum. Luka is Dogon, and I asked him about Sirius and the double star and the mysterious ancient aliens of his mythology. He had never heard of it. As ideas are filtered across cultures, they succumb to overwhelming cultural misinterpretations – coming from another place brings with it a penchant for the sensational and exotic. The questionable veracity of the myth, or even the historical veracity, is largely irrelevant, as this myth has become part of the West’s West African canon. It may well be reinvigorated as Bamakois discover Leon’s album.

Working with mythic objects is purposefully confusing. The results of this journey lie somewhere between the fiction and the real; a necessary component of realizing an idea across cultures, resulting in objects that straddle both worlds. Some of the field recordings may not be comprehensible at the moment. The Venn diagram of Luka’s contribution borrows context from Bambara speakers and Western vinyl collectors – a very small contingency. Vinyl records have an element of timelessness, only exaggerated in the presence of the fleeting digital. It is rumored that the Church of Scientology has left vinyl records of their scripture buried them in bunkers around the world – so when the surface of the planet is a smoldering crust, the survivors will come across these recordings and build an empire with their blueprint. Today’s fiction only needs time to pass into mythology.