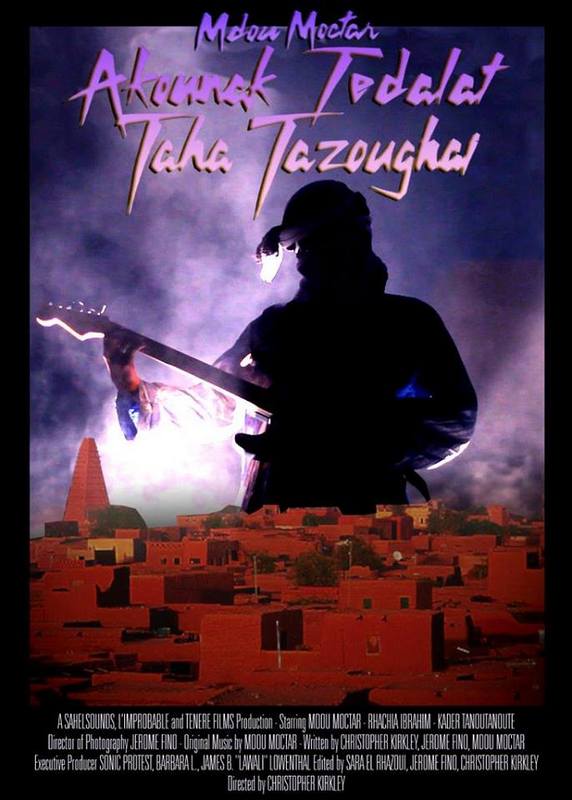 After nearly a year from our shoot, we’re pleased to announce the premiere of our film. Starring Mdou Moctar, a longtime Sahel Sounds artist and collaborator, Akounak Tedalat Taha Tazoughai (“Rain the Color Blue with a little Red in it”) is the fictional tale of a young guitarist trying to make it against all odds. You can read more about it here.

Per the aforementioned Kickstarter, we’ll be premiering the film in two places: Jan. 29th at the Hollywood Theater in Portland, Oregon, followed by a premiere Feb. 5th at Le Gyptis in Marseille, France.

Though originally slated to be released quickly, a mere six months after the shoot, post-production was extended far beyond the realm envisioned. We enlisted a team for color correction, recorded new versions of the songs, redubbed portions of the audio, delved into foley work, and hired a sound engineer to mix and master the audio. Most of the post-production steps were unexpected, as the interest in the film caught us by surprise. What we had imagined as an experimental project with a handful of screenings in the West and distribution via West African DVD players transformed into something beyond our expectations. Post-production is something overlooked by many filmmakers, especially this one. Next time, it would be interesting to follow with a post that could be done in record time, carried out in West Africa – a fully encapsulated project start to finish on the ground. Though we’re in no hurry to remake Under the Cherry Moon.

We had the chance to screen the film in Agadez in September 2014. It was a very vocal crowd, filled over capacity, and the film was punctuated with cheers and applause. The Agadez reviews are good, which was a most flattering conclusion to the project. But more work remains – we’ve still got Kickstarter rewards coming, and DVDs are in production. The soundtrack is in its final stages of mixing and an LP will be released this year. And we are slated to release the film in West Africa across the Tuareg diaspora – so if you find yourself in Agadez, Sebha, Tamanrasset, or Kidal, look for the film soon. Whether on DVD, USB key, or a cellphone is up to you. Tastes may vary.