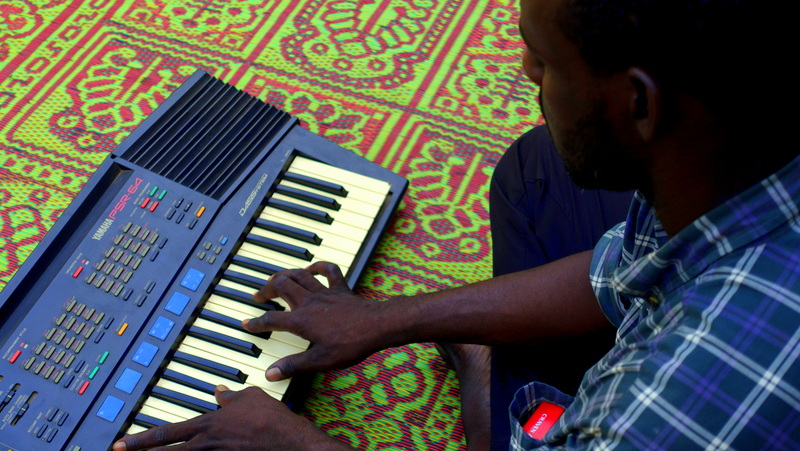 The first time I heard the music was (naturally) on a cellphone. It was March of 2012, and I left Gao in a rush as the Northern cities fell to the rebellion. I nervously scanned the horizon as the bus blew past abandoned police posts – managing to Zoom a field recording of the song playing on a fellow passenger’s phone.

I continued to find more versions of the piano music. After questions, interviews, and Facebook inquiries, I went to Agadez and gathered up more tracks. Eventually, I learned the identity of the musician – a certain “Japonais,” former rebellion fighter for the MNJ, and pianist. I met the family, and we discussed releasing the material on a record. I began mastering the songs. The records were in the queue, and would soon arrive.

But it wasn’t him.

A few months ago, I head back to Niger with a contract and envelope of money. One night we hear one of the songs playing from a nearby cellphone. When the crew stops by to investigate, they’re told a different name: “Hama”. When they report back to me, I tell them they must be mistaken. This is Japonais. Everyone in Agadez knows this. Every mp3 is tagged with his name. I’ve even met with the family, who confirmed it. But the other friends in the Niamey neighborhood are insistent. Not only is this Hama, but he lives close by here – and tomorrow we’ll go visit him.

Hama lives with his family in one of the old neighborhoods of Niamey, Plateau. It’s a calm section of central Niamey with large old concrete houses and tall trees. The Embassies were once here and Hama grew up amongst the expatriates and embassy staff. It was one of these expatriates that gave Hama his first melodica, then synthesizer. In 2005, he found a Yamaha PSR-64. It’s a distinctive sound – warbly, with quarter tones. It features drum programming, which Hama uses to create the signature rhythms on his tracks, all of but one are original compositions. He asks me to sit down, and he begins to play a sound unmistakable from the recording. When he finished he looks up – “Well? Is it me?”

In 2009, he was invited to the radio to record the instrumental tracks that now circulate through the cellphone networks. While awaiting the completion of his CD, one of the sound engineers copied the songs. But when they were copied, it was with the generic filename: “NOUVEAU INSTRUI”. Hama’s name wasn’t on the file or the id3 tag, and they dispersed throughout the country with no link back to him. Being instrumental music furthermore, it was hard to make any claim to it.

They would have remain unidentifiable music, if it were not for Japonais. A well known figure in the rebellion, Japonais was in fact a Tuareg synth player – as well as a guitarist. His assassination by government troops was an injustice that still reverberates in the North today. Little by little, these unlabeled songs began to pick up the name “Japonais” – by mp3 sellers, cellphone owners, and radio djs – who assumed it was none other than their celebrated hero.

Back in Niamey, only his friends know who he is. He performs rarely and is not a professional musician, working as a driver for a wealthy expatriate businessman. He plays his synthesizer in the evening, but has lately moved into composing music on a computer – using FruityLoops. He demonstrates some of the music, playing a live session, alternatively muting and un-muting looping hi-hats and basslines. “Since I found the computer, I don’t need to look for music anymore, I can compose the songs I want to listen to.” He plays his recreations of Phil Collins and Lil Jon – where he has painstakingly created the melody with a piano VST. “If I could only plug my piano into the computer, I know I could make a lot of things…”