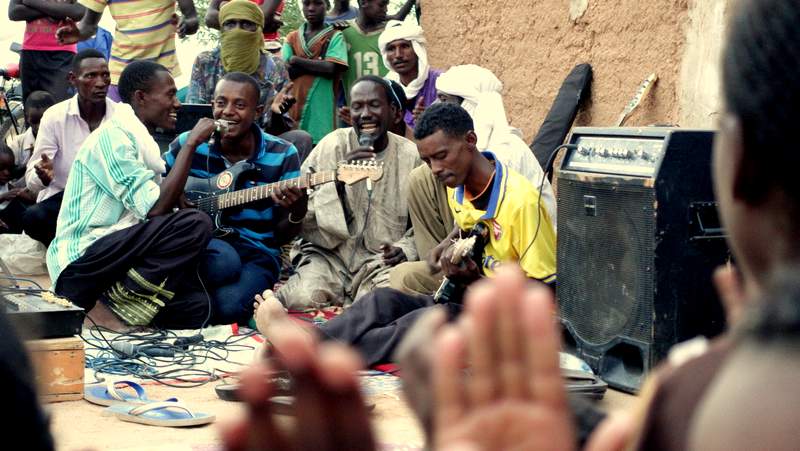 The members of Etran live together in the neighborhood of Abana, across a wadi in the outskirts of Agadez. It was once here that the caravans stopped to rest before the journey to Bilma. Contrary to the rest of Agadez, it’s sparsely built admist tiny mud houses are scattered amongst dry spiny trees.

Etran de l’Aïr is a family band. Brothers and cousins, they are all somehow related, though I’m not sure how. They’ve organized a small session at the house. The band sits on a tapi, surrounded by their material, in an almost impressive state of disrepair. The electricity comes from one of the houses that has electricity in the quartier, dropping in and out. All the small children and toddlers from the neighborhood gather around waiting for the session to begin. The band soundchecks and launches into song.

Etran de L’Aïr – or “stars of Aïr,” play a music that draws heavily from Hausa and Zarma guitar music. Though the members are Tuareg, unlike the Tuareg guitar, it is not strictly in pentatonic and is untethered from this tradition. Some of the songs have three guitars – one for rhythm and two solo guitars that mimic eachother dropping in and out of phase creating a bubbly underwater melody. The trembling solos recall more Tal National than Abdallah Oumbadougou. The lyrics may be in Tamashek, but in spirit the music is Agadez music – Hausa identity, frenetic rhythm, crashing drums.

Agadez means the “place of visit” in the Tamashek language. It’s a ancient city with origins as a crossroads and trading center. While internationally billed as a Tuareg town on the tourist circuit, Agadez is something different. It has been shaped by generations of cultural influence from the South, and Hausa culture has made an indisputable imprint. But Etran is beholden to neither. Far from famous, Etran earns their living from playing in the poorest weddings, and have played for fifteen years. Yet they are known in the Agadez, especially for the above anthem, a song celebrating their city. Uncategorizable, Etran plays music that is not Tuareg nor Hausa, but distinctly that of Agadez.