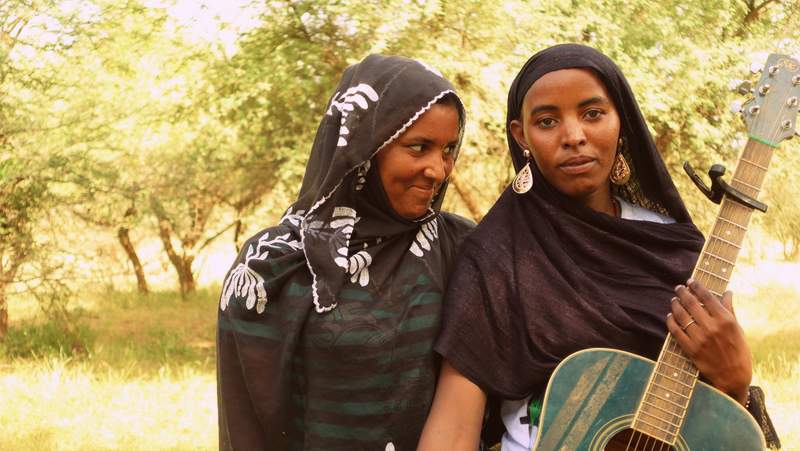 Fatou Seidi Ghali is a guitarist – of note, perhaps, as the other woman guitarist in Niger (there are only two). Over a year prior, a photo was circulating on Facebook of her playing a red electric guitar in a festival. The photo was liked, and shared. Later, I learned that Ahmoudou from Mdou’s group had taken the photo and posted it. Fatou was a cousin from his hometown.

We travel to Illighadad, a small village 40 kilometers outside of Abalak. It’s the bush, but the village boasts a number of small houses and a school. There are thousands of goats. Tall, wispy grasses cover the ground. There are seasonal water holes everywhere, and at the end of the rainy season, big white egrets weigh down the tree limbs. Flowers bloom on lily pads. Camels splash through the mud. Fatou’s family lives a few kilometers from the village, about an hour on foot. We take motorbikes.

Fatou has played guitar for only about four years. She learned to play alongside her brother. With her two sisters, Fatou is known in Illighadad known more for her singing tende, the stretched water drum fabricated from a mortar, played in weddings and festivals. Even some of the songs are the same, played here on a guitar.

We sit under some trees, back from the house and away from the kids from the village that have come out en masse to watch the recording. In the quiet of the late afternoon, Fatou sings softly but distinctly. She plays the guitar, accompanied by her sisters and brother and a chorus of crickets announcing the end of the rainy season.

abba’s home recordings, or how whatsapp is changing everything (pt 1)