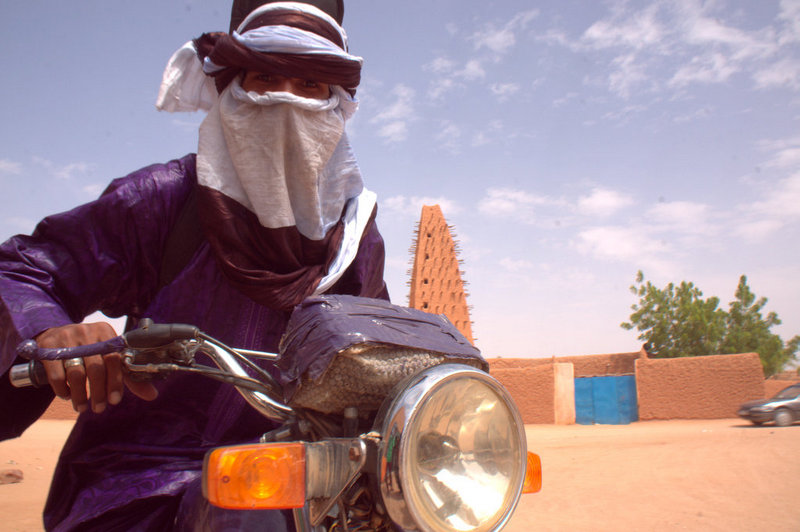 A few years back, a friend and I were joking about the idea of adapting films to the Sahara. The buddy cop film in Nouakchott, the alien invasion of the Western Sahara. We eventually came to Prince’s 1984 epic rock-u-drama Purple Rain, which seemed the ideal model. The film is written around a musician. In some ways, it plays like a long music video. While some of the writing seems kitsch today and riddled with clichés, the idea at the core – a fictional film very loosely based around the life and struggle of a musician – was a feasible project that could be possible.

Flashforward a few years, I began working with Mdou Moctar (the autotuned star of the Music from Saharan Cellphones compilations) and Jerome Fino of the French collective L’improbable to make this film a reality. Over three weeks in Niger, we started shooting, found a cast and crew, and most importantly, began rewriting the story from the perspective and experiences of Mdou and his fellow musicians. The resulting project that we’ve titled Akounak Tedalat Taha Tazoughai (English: “Rain the Color of Blue with a little Red in it”) is less a remake than a homage – a telling of a universal story. Akounak follows a fictional Mdou who has just moved to Agadez, and his struggle to become a star in the winner takes all scene of Tuareg guitar music. The movie is full of musical performance and features a number of Agadez’s star musicians.

Akounak will have the honor of being the first ever movie shot in the Tuareg language (specifically, a mixture of dialects from Aïr and Azawagh). We want it to be a hit in the desert (we’ll release it as DVDs in Niger and as 3GP on cellphones). But it will also be one of the few fiction films concerned with the Tuareg music subculture. While Tuareg guitar has been explored somewhat exhaustively in documentary features, most of these films have focused on the political origins of the folk music – not how it thrives today. Like my friend Drew Wilson says, this film is not about Kalashnikovs but “cellphones, motorcycles, and guitars.”

The Kickstarter is now well underway, so we’ll be headed back next month to shoot the project. If we exceed the goal, we’ll be adding more rewards and goals – maybe a vinyl original soundtrack recording? Stay tuned.

i sing the desert electric

a story of sahel sounds