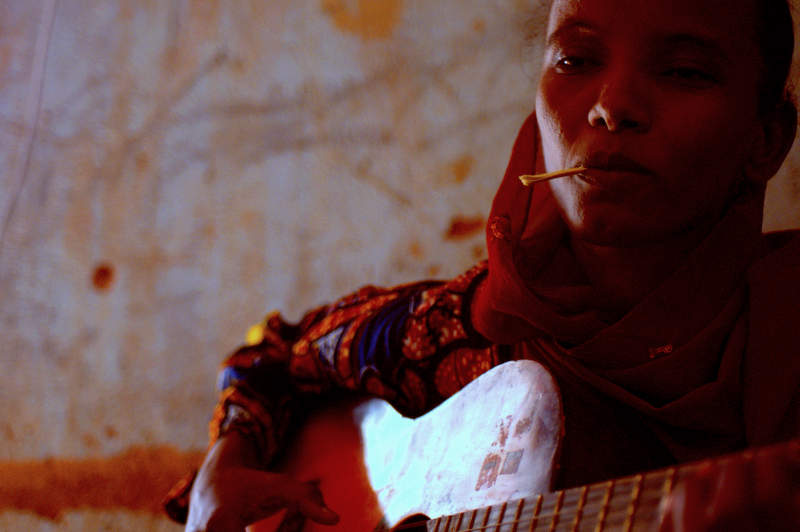 Mariam Ahmed is a guitarist in Agadez, which in itself is not spectacular. With so many guitarists in the city, one needs not to search far. However, there are practically no female guitarists in Tuareg music and Mariam is perhaps one of a handful across the diaspora.

Tuareg guitar is largely a folk tradition of men. While not imposed by force, it is maintained by social norms of where the guitar appears. The long days of the ishumar, teapot slowly bubbling on coal, is a world segregated by gender. When guitar enters, it is in this male milieu (a world reflected in my recordings over the past years, which are mostly of male artists).

When I press her on the subject with a litany of thinly veiled questions about the gender dynamics of Tuareg guitar – “is it hard to be a female guitarist” – she simply shrugs and shakes her head. Later, Mdou posits that the bigger problem and prohibitions on playing music are class based – if family comes from a tradition of nobles and chiefs, or a religious lineage of marabouts. Mariam comes from neither, so can play shred in weddings.

I’m left expecting more, waiting for her to deliver some explanation. I begin to suspect that I’m more focused on this imagined conflict with a woman guitarist than anyone else. Later that evening, Mariam returns and we record three songs on her acoustic guitar. I finally stop asking questions and Mariam plays. She sings in a soft voice, carried by her acoustic guitar but with a driving pace. Part way through, the power cuts out and we’re left in total darkness. I can’t see anything. She keeps playing.

a story of sahel sounds

the last recordings of gao