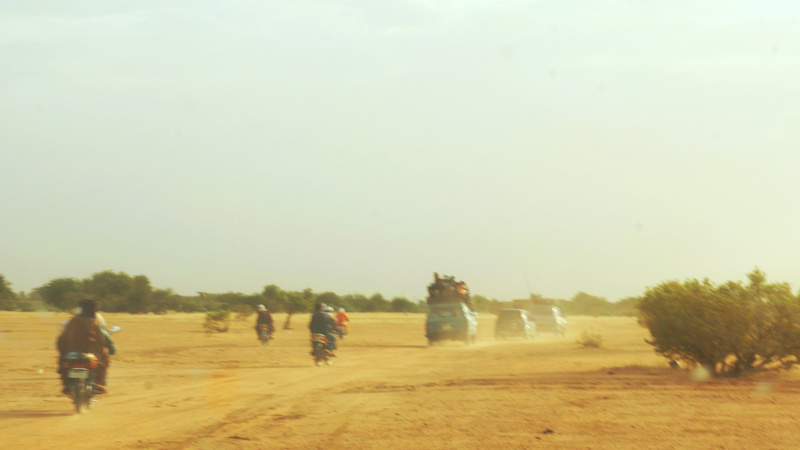 While in Agadez, we dip out of town for a wedding. There’s a very vanilla, somewhat boring, festivity at the bride’s village – a handful of people sit under a tree while the band plays a lukewarm guitar concert – and I consider heading back into town. But suddenly it’s time to move to the groom’s house – in this case, a nomad encampment in the bush. The party quickly disperses, climbing onto motorcycles and into (and top of) Landcruiser trucks. What ensues is a raucous race through the desert, as we chase and overtake each other in blinding clouds of dust. The women in the backseat are cheering, the men let out war whoops. The driver, however, is quiet and focused, eyes dead forward even as he reaches down for a cigarette which has fallen out of the pack.

Mohamed is a “frauder,” a respected occupation, perhaps owing to its renegade and dangerous reputation. “Frauders” make the three-day journey from Agadez to Libya directly through the desert, circumventing police checkpoints and borders. They deal in people – anyone wanting to travel to Libya, for example – but can and do transport anything else: smuggled goods, alcohol (illegal in Libya), or drugs. The other thing they bring is mp3s. Mohamed has a USB key plugged into his stereo. “You have to have music with you, three days, nothing out there…” he says, later.

As we’re streaking through the desert towards the bush, barely avoiding the spindly acacia trees and other motorcycles, he chooses the most serene music: Ishumar ballads, Arabic reggae, Hindu film songs, all inspiring that mild concentration amidst the tumult. One song “from Sudan,” he says, is of a woman, singing over this delicate synth that answers her. “You have to get me this song,” I tell him. He shrugs. But the next day he’s preoccupied with an upcoming trip in a few days, circling through town, meeting up with Ghanaians and Senegalese from far away and passing out burner SIM cards, for who knows what purpose. I never see him again after that, he disappears back to Libya. I’m able to find a few of the standout Libyan Reggae* with local mp3 sellers. But the bulk of the music as we crashed through the desert is gone, vanishing with Mohamed back on the long trek North.

*Libyan Reggae (or “regue lybie”) is all over Youtube. It’s also undoubtedly the source of the mystery “Friday” track (featured on Cellphones Vol. 2). The kids in Agadez tell me they started hearing this genre around 2001.