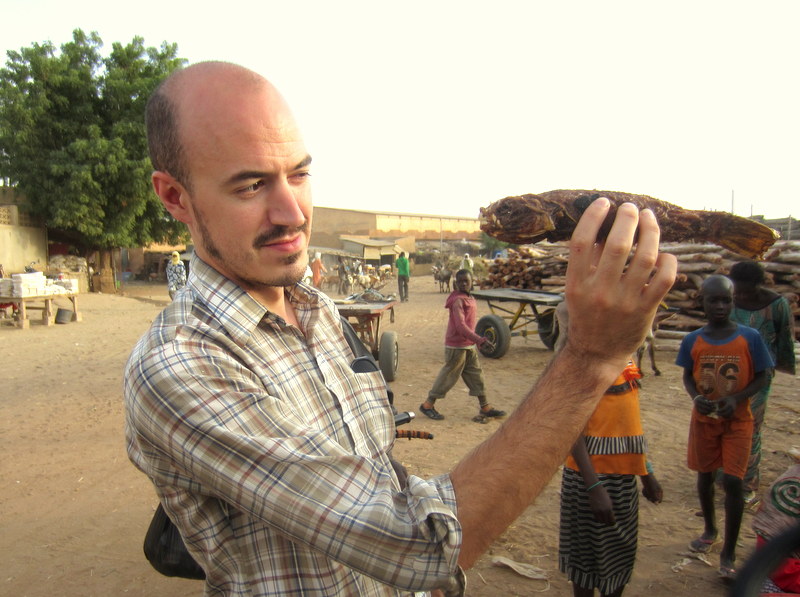 I was recently stopped again while coming back to the US. It has come to my attention that I am officially a “high risk” category as potential terrorist because of my travels in West Africa, and I’m currently awaiting more documents pertaining to my situation requested via the Freedom of Information Act. The above photo is from a recent meeting with a Homeland Security agent in Minneapolis.

While returning from Sweden I was once again pulled aside for a “secondary screening.” This process has become routine to me, and occurs every time I return home. In every airport, it seems to be fairly standardized. I am told to take a seat in a large room that is walled on one side by mirrored glass. A few agents sit behind PCs. They are not smiling. The room is never full, but contains a handful of people, not surprisingly, who are mostly Arab and North African.

At this point, typically, my bags and all my personal belonging are taken and searched. In this most recent case, they are even searched in front of me. There is an agent at the desk who then calls me and asks questions about my travels. If I am returning from Africa, they often include surreal questions about military training and weapons. Sometimes they are merely about the purpose of my trip, my business, the name of my website. They ask for spelling clarifications. Many have never heard of Mali.

Throughout this entire process, the agents are typically rude, barking orders, or making sarcastic quips. The power sits on their side of the desk and I need to be cleared as a suspect. “After all,” they insist, “we are just doing our job.” Going up against any Kafkaesque scenario (a word that the agents, I assume, are unfamiliar with) is unnerving. Given the nature of my work, it is infuriating.

For four years now, I’ve been running a project working in the Sahara desert. It has evolved into a music project, where I regularly travel to West Africa to document and record music, which is then produced and released in America. This project brings me into contact, conversation, and exchange with thousands of regular people. But it also brings me into a corner of the world that has political instability and increasing groups of extremist fundamentalists (who, I feel I should add for your notes, despise popular music).

You are Homeland Security. Your clearly stated mission is “to secure the nation from the many threats we face.” It’s an important mission – one that I should know a lot about, as someone who actually faces those threats in person. In fact, I can say with some confidence that I have more experience with threats than most of your staff. I suffer directly the risks of my nationality, with ever looming threats of assault, kidnappings, and yes, terrorism.

Yet through these potential risks, one of the results of my travels (or ANY travels) is the nullifying effect that they may have on future threats. As a foreigner working abroad I always hear misinformed ideas of Americans and American culture. As the only American around, I am the sounding board, and it is my job to respond to every cultural critique, political act, and the sum of US historical events stretching back to the nation’s founding. It falls on me to act as an ambassador, to represent the entire country and every American, to discredit erroneous politics and propaganda, to quell anger and hatred, and in a personal example, counter the misconceptions that lead to radicalization.

It is evident then, why it should strike me as such an offense to be subjected to this target profiling when I arrive home. My work is a constant effort of defending the country abroad through my actions. I am American, the American who is out there, in the world, under threat of terrorism, promoting the values you intend to proclaim. And yet, on arrival in my own country, I am treated as a potential terrorist myself. I would ask, no demand, that you remove me from this list.

This is my country. You work for me. Please remember that.