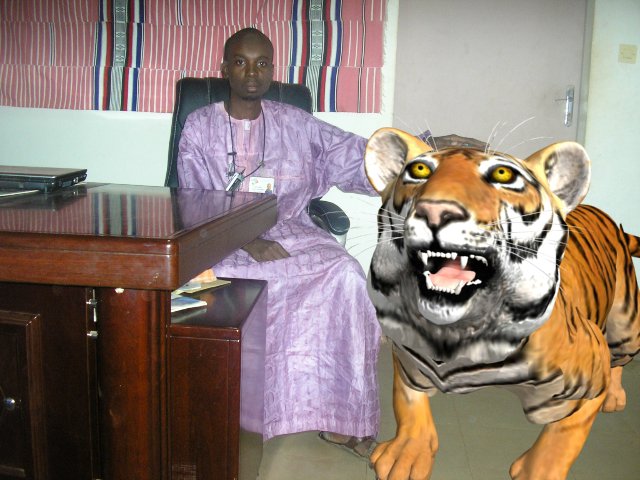 Wandering through Youtube, I recently stumbled across the work of Cheik Ouattara. Amongst the Malian Youtube content – an abundance of music video clips, ripped from the national television, ORTM – this was vastly different. A montage of shots shows what is undoubtedly Bamako, with the banks of the Niger and the smoggy sky. But in this Bamako, unbeknownst to the stream of commuters on motorbikes, a giant red dinosaur wreaks havoc, galloping over the bridge and into the center of town – where it meets a young man who can see it, and covers his head as it unleashes a roar. This brief sequence is one of the vast, albeit brief oeuvre of Ouattara, a self-taught 3D animator and the first in Mali to experiment in live action animation.

Cheik runs a small advertising agency in Bamako designing logos and short animation sequences for state television, educational systems, and local NGOs. Using 3D, Java-based animation software, Cheick combines live action with computer animation. His short clips on Youtube, from technical test videos and samples, show skeletons dancing in the Niger, X-wings flying over the Niger river, and animated crocodiles. His objective is cinema, and his collective has made some moves in this direction, working on a film for the French Cultural Center and in talks about a movie about Vampire Mosquitoes. “Our difference from other West African filmmakers,” Cheik says, “is we want to make films with animation and special effects – science fiction and fantasy films.”

One particular trailer begins with a preamble describing the conflict in the North of Mali against the Islamists, and the resultant effort to create cyborg warriors. The short video shows terminator-esque machines racing Northwards from Douentza, retaking Timbouctou, sauntering before the ancient mosques and libraries. “The idea is,” he explains, “with the war in Mali, people have been asking ‘Who will come to help’? In the film, Malians working abroad create Malian cyborgs. The problem is, when the robots liberate the North, they become their own problem. When you create artificial intelligence, it wants to preserve its own place. This will create a new problem, between humans and cyborgs.”

Cheick has hope for the film, in among other things, showcasing the unity of the country. “I want to show there is no difference between people. When the resistance starts against the cyborgs, the Tamashek are going to play a big role. They know the most about the desert, and they’ll be the ones who will be fighting the robot war,” he says. “Before everything, they were the masters of the North.”

The intended film will be a mix of live action and animation. Using the Xbox Kinect to capture motion, Cheick intends to trace out the movements of the cyborgs. The film would require filming in the Timbouctou and hours of animation. “We want to simulate a cyborg war,” he explains. It’s a big project, and the short Youtube trailer is just a synopsis to show the possibility of the idea.” And while there is no firm plan or Malian Kickstarter to make the vision a reality, Cheikh continues his work – his Youtube stream is available here.

Zerzura, crowdfunding for a magical city