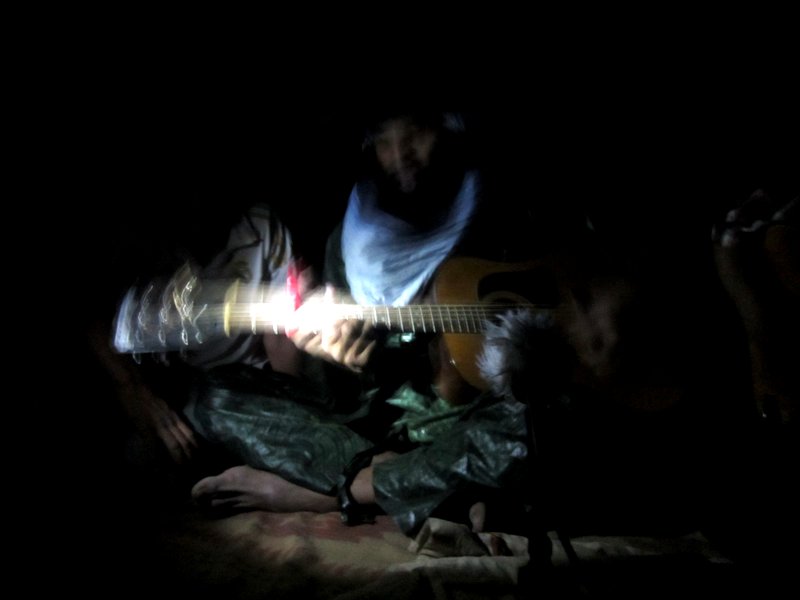 Everything that he had earned in Libya, he gave to his mother. He had nothing left. He asked her for his old guitar that he had left there in his absence, sitting abandoned in the corner. He put on new strings and took it out to play. Two days afterward, he left for Abalak with some new friends, but soon they had to return to their village. They liked his guitar. One week later, they called him and invited him to come and stay for a while. They organized large picnics, sitting under the acacia trees.

There was a girl. And he fell in love with her. She would always say, “You are super.” So he started calling her “My Super.”

One day when they all came together, she wasn’t there. He saw later and asked, why didn’t you come, she said if you want to find me you know where to find me. He loved her, but he couldn’t say such a bold thing. He had just arrived. The next day, she was sleeping in the desert at Toruf, at her grandmother’s tent. He took a horse with his friend, Sayid, and went to the bush. He wore a strong perfume, and she knew it was him before he even arrived. There was a young man at her side, talking. The young man wanted him to leave. But she wanted him to stay. The three of them sat there in the dark. He talked to her, but the young man kept interrupting. Eventually, after much deliberation, the young man left. He stayed and talked with her late until the night.

They were always together after that, every night, during the tende going home just before the first-morning prayer. He composed his song Super: “I love you more than a big taknit with all the beautiful girls.” And everything was fine. One week turned into a month.

But soon, someone came to him and told him – this girl is married, she married a student who lives in another town. Now, there was nothing he could do.

Five days later the husband returned. He told himself, if he’s not a nice man, I’ll continue just until she’s divorced so I can marry her. He talked with her husband, who was immediately friendly. It was not what he was expecting. A few days later, he met her at night, neither of them knowing that her husband was still there. They were talking under the tent when the husband came home. He sat down and said Hello Mdou. The girl was silent. The husband said you should stay, I’ll leave. And he left.

In the morning the husband sent a child to invite him to come to his house. He told them he would come and tried to waste time. The child came a second time. He followed the child. When he arrived, he was met by the husband and his two brothers. They greeted him, offered him a seat, and began making tea. They said nothing. The husband said it’s necessary that you walk with me to the market, 5 kilometers through the desert. They walked the whole way. Again, he said nothing.

He realized there was nothing he could do, and he returned to Abalak. He wrote songs.

“I have a spine that pierces me in the heart, but I can’t see it, and I can’t take it out.”

“Love has become a malady for me – the night passes without sleep, and in the morning I don’t do anything but think of her.”

“If the love for her had a cure, I would drink it regardless of the taste.”

“My dream is to turn into a small bird to give her a kiss between her eyebrows.”

He stayed in Abalak and said nothing more to her. Months later, he received the news that they were going to be married. He fled the country and went to Nigeria, traveling until the land ended and the ocean began.