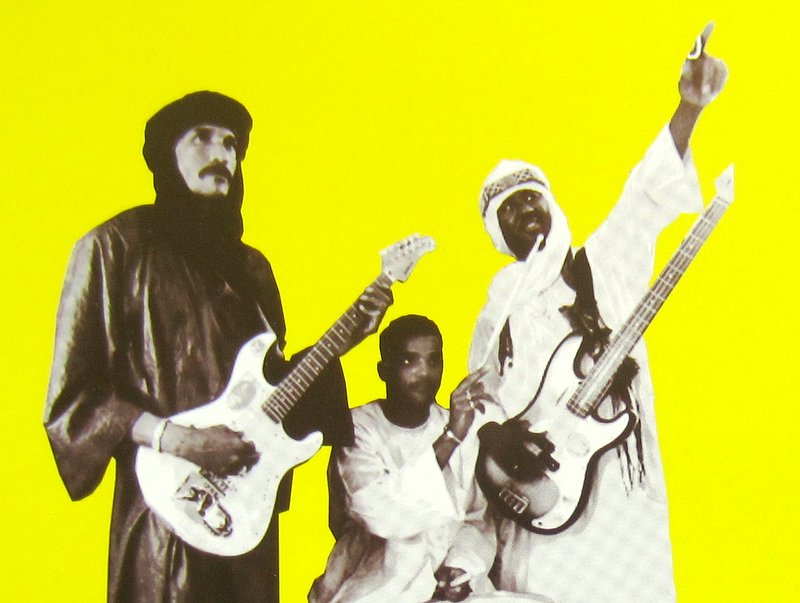 Amanar, the modern guitar Tuareg band from Northern Mali has been featured frequently on this site (1, 2) and numerous vinyl compilations. Their 2008 sessions, recorded locally in Kidal, are high energy guitar pop. While inspired by the preceding repertoire of guitar music, the album marked a departure from the mold of Western conceptions of Tuareg rock. Celebrated by the youth, Amanar rose to the status of town band in the desert capital of Kidal.

French label Reaktion released the sessions of Alghafiat in 2010 for digital download. This year, in collaboration with Portland label Little Axe Records, we’ve pressed 1000 copies on vinyl. Drawing on some of the original artwork for the release, the text of the album is in Tifinagh, as well as the liner notes, which were fastidiously translated by Hamza Mohamed Fofo, probably the world’s leading expert on the script.

I thought it might be time for a remix competition. I’ve been sitting on the original files, possibly the only copies since the studio was recently destroyed by extremists. The song “Tenere,” (“desert” in the Tamashek language) was a hit in the Kidal concerts. The lyrics contain inherent messages like most guitar songs, this one invoking the desert in the metaphorical sense as a place of retreat: “It’s better to be alone than with a bad friend.”

Remix or reinterpret, and send the completed file back (please include your name in the file). The remixes will go up on a Bandcamp EP for free download. Maybe if there’s a really great one we can talk about putting out a 7″. Please get your remix in by October 1st – you can send them via email to ckirkley (at) gmail.com. Happy remixing!