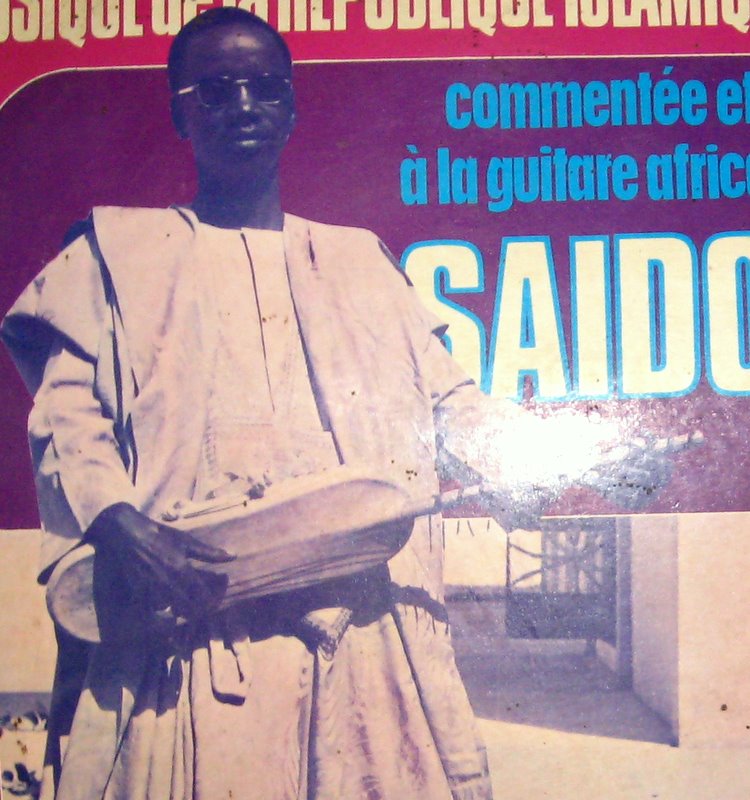 The hodou, the traditional Pulaar guitar, is often used to tell a story. And perhaps one of the best known modern storytellers in Mauritania was musician Saïdou Ba:

“Born in 1939 in Daou (in the commune of Maghama) to a circle of artists attached to the old traditional Pulaar families Yalalbe and Déniankobé, Saïdou Ba bathed since his childhood in this world of music. His father Hamady Coulo was already a guitarist of talent and renown, and Saïdou inherited that exceptional connection that develops between the guitarist and his instrument, the mysterious relationship that makes virtuosos.

Very early fatherless, young Saïdou was sent to Wodobérè (in the commune of Matam, Senegal) where, in the shadow of guardian Madam Oumou Dia, he studied with the best traditional instrumentalists of the time. It was here that he met the celebrity Oumar Gaoulo and at age 15, in 1954, became a leading figure in the group of artists and singers known in Dakar at the time as “Lêle Groups”.

But it was 1957 which marked a turning point in the career of the already famous young musician. Radio Saint Louis (which was simultaneously broadcast in Senegal and Mauritania) launched a competition for recruitment of traditional artists, and the young Saïdou was quickly selected. That was the birth of the famous trio, Djibril Kane, San Amadou, and Saïdou Ba, who in the following years would entertain on the radio to joy of listeners.

When transferred to Radio Mauritania in Nouakchott, Saïdou Ba returned to his country and became host of the program. For his keen intelligence and his love of music, he was selected for a course of modern music in Guinea. Along with those who would compose the National Orchestra, he continued in courses in Conakry until 1969. He returned to Nouakchott, a member of the National Orchestra, specialized in backup guitar.”

1. SAYGLARÉ: A tribute to Gueladio – Hambodurion, one of the most illustrious horsemen of the Macina Fulani who was bound for strange and glorious destiny in Segou because of his Bambara and Fulani father. His name still conjures dreams to those who remember the epics tales.

2: MALISSADIO: The waters of the rivers have their mysteries. The master of the water has his world, a murky world of streaks of light, millions of fins, and the phosphorescence of millions of pairs of eyes. The Master of the waters took away the beautiful and young Mali deep in a world where death is not death but transfiguration. And Saïdou, his friend, wrote this song to mourn his loss.

3. NÉEMA: Sometimes cruel laws of nature have their logic, an obscure logic. Fortune changes place, the weak become strong and the strong live only on memory and nostalgia of the past, and songs like Neema stand on their own, and their music remains in the night like a question for the incomprehensible.

1. N’DIAROU: N’Diarou, a praise to Oumarel Sawa-Dondi, an homage to life began on the shores of Senegal, to Gamadji, and finished on the banks of the Niger in the distance Macina. And all the Hal-Pullar who feel these notes vibrate to the glory of the sword, the most prestigious ever at the service of Islam.

2. DOMBA: The shoemaker may be a skilled craftsmen and make beautiful shoes. But what a cobbler can boast of making the best pair of shoes in time for a chorus? This was the success of the young Sylla, and in return, his sister composed this song, and the song became immortal.