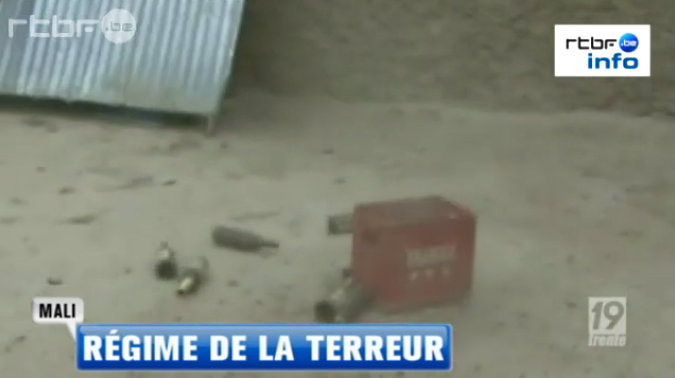 Régime De La Terreur: Ansar Dine has invaded the North of Mali, imposing a Taliban style Sharia. A cut to turbaned men breaking glass, overturning plastic crates of amber beer bottles, shouting ‘Allah Akbar.” It’s vicious, yet the religious fervor seems a bit staged. They are excited, not with righteousness, but with the spectacle. They are all too aware and like goofy kids are starstruck. After all, much like the towns under Sharia, the beer bottles are empty.

In the next cut, we see a young man smashing a carved wooden statue against the ground while onlookers gather. His efforts are futile, the statue is difficult to break. The central idea is that this is an idol and prohibited by Islam. Maybe we’re meant to believe this is was forcibly requisitioned from a practitioner’s home. One of Ansar Dine, with a boyish grin, launches into an explanation: “This is a sin, we can’t bow before this statue like this.” But this statue is Dogon — it is clearly not from a home but from one of the three or four tourist shops lining Askia Mohamed Blvd. It is as foreign here as Ansar Dine. The turbaned man again picks up the little statuette and throws it against the pavement in what is clearly an all too alluring spectacle for the camera, violently smashing a tourist trinket (an actor who’s an ironic metaphor is all too obvious). Meanwhile, a crowd gathers; they’ve not been rounded up or forced here at gunpoint. They’ve come to watch the circus.

Fadikanda is a popular personage in Northern Mali, a large woman with a clear and severe mental affliction but an unwavering dedication to every musical festival, political rally, and trade fair. Rumored to have the ear of former president ATT, she is allowed to wander onto a stage during a performance, her unpredictable behavior forcing the officials to humor her and the crowds to let her indulge in Quixotic fantasy. She polices the events, walking around with a stick, violently chastising children who swim around her like a school of fish, taunting and darting in unison out of her path as she lunges. With her unkempt hair and ragged clothing, she is regarded as a comedic character or a jester. In her delusion, she is providing order to the mass (her delusion is rarely tested though somewhere deep in the recess she knows her limits and therefore raises her stick only against the fearful and outmatched children.) For Fadikanda, the gathering crowds are a testament to her force, an ode to her power.

Fadikanda is a modern folk character, and while once limited to existence in oral histories, she has now been transposed to the cellular phone. In fact, videos of the mentally ill populate the terrain of personal video collections: Fadikanda, the wandering minstrel “Marchand du Soleil,” or the young man from Abeibara who’s head injury inspires these long comedic poetries.) The camera and the crowd have an inspiring effect on their subjects. Much like the antics of Fadikanda, the characters of Ansar Dine can be lured into delusions of grandeur, elated by a few bored children gathering in the streets of Timbouctou with cellphones or enlivened through the lens of an international news report. Yet their actions are regarded with the mocking curiosity assigned to the mentally ill: “What will they do next?” And if one watches the video closely, it is not fear in the eyes of the civilians of Timbouctou — their presence alone refutes this — but the eyes of those watching the circus, gathering for the spectacle of the clown, the insane, the foreign zealot who smashes a wooden trinket stolen from a tourist shop with a bizarre frenzy in the street.