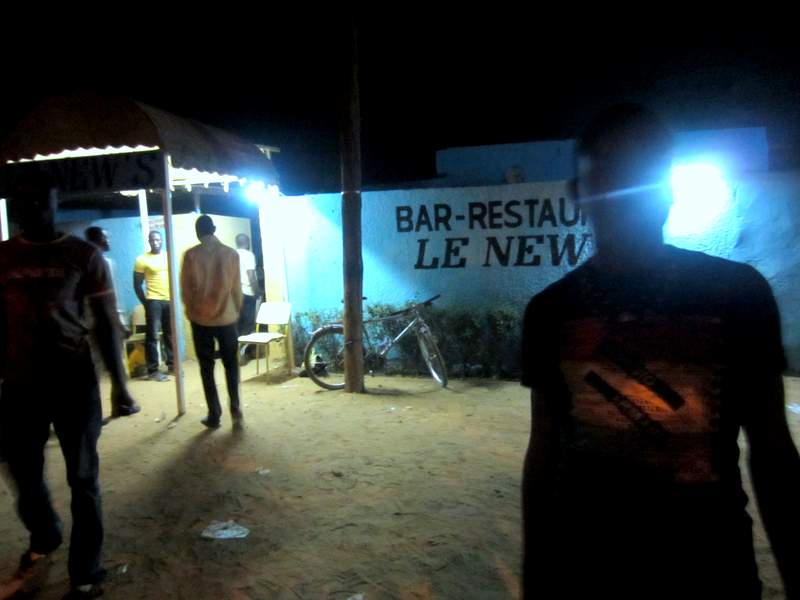 The bar is called The New’s. The blue and white painted walls encircle a courtyard of broken mosaic tile. The crowd pours back beer in amber bottles, men in tight fitted t-shirts and suit jackets sitting statuesque and bored or a handful losing their shit on the dancefloor. A flickering strobe cycles through all the colors of the rainbow. On the wall next to the bar, a projector broadcasts a WWF match and Big Show talks into a microphone, translated in Arabic subtitles, but there is no sound. An old electric roulette machine flashes lights. It’s slightly slanted. Every space is filled with the flooded out music of the bar band. They’re out of tune and out of step with one another. It’s Zirma rock, but it sounds like free jazz. The singer does his round of the tables, microphone in hand, singing praises to the people sitting there, who affect this passive stance as he yells into their faces and hovers over their table like a mariachi band at a Tex-Mex restaurant, waiting for his tip so he can move on to the next table. A slight wind blows and mixes the scents of cigarettes and stale beer. The waitress collects her orders and returns with a blue wicker basket full of cans and bottles. No one asks me for a drink, looks in my direction, or talks to me. The band keeps playing and I can swear the drum has no kick pedal, in any case, it’s not mic’d and it’s drowned out by the clipped vocals of the lead singer. I look beyond the courtyard where a building of concrete and rebar stands in some state of transition — I’m unable to determine if it’s unfinished or falling apart.