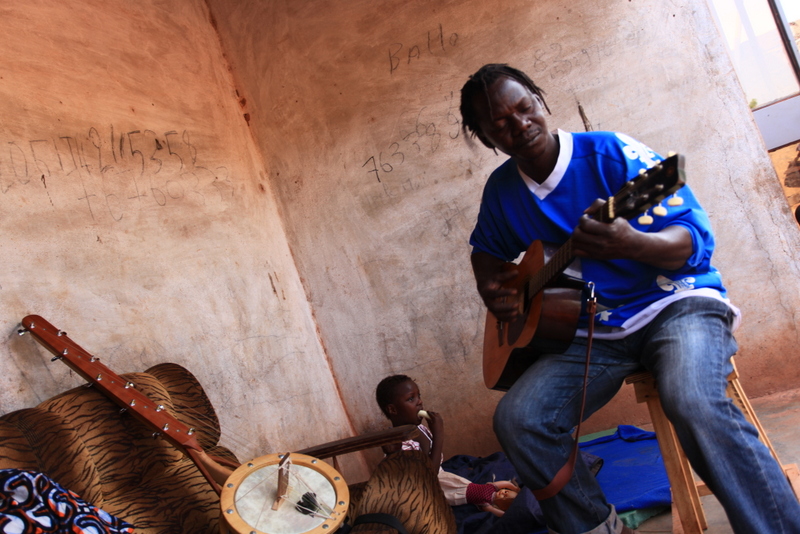 Bamako sits in a valley, the river slicing through the city. It’s a fascinating and easy place compared to the other metropolises, but for the perpetual haze drifting over the water, smoke spewing from the chinese motorbikes screaming back and forth over the bridges, the ramshackle taxi buses with blaring horns. It’s difficult to leave once you’re in the city, the sprawl unfolding outwards over the foreseeable horizon. It takes a call from the musician Jah Youssouf to escape the throes of the capital, a long taxi ride beyond Bamako.

Jah Youssouf lives at the edges, where the density and noise of the city disintegrates into wide swaths of red dust and rock. The ribbon of asphalt is shared with horses and carriages. This is the neighborhood Moribabougou, technically still a part of Bamako, but with village ambitions. The taxi drops us alongside a mud oven where nearby a man is butchering a decapitated sheep hanging (formerly) head first. A small boy inches closer and closer, awkwardly playing with his cellphone, patiently waiting to see what it is we’re doing. Suddenly, a car comes screaming over the football field, headlights flashing. Jah rolls down the window and waves us inside, spiriting us away to his house.

Jah Youssouf is a well known musician in Mali, playing Wassoulou music. He was self taught on the kamel Ngoni, the 10 string harp popular in the Dozo, or “hunters'” music. His wife, Bintou Coulibaly is also a musician, accompanying him with vocals and on the calabash. We happen to arrive on a busy day — Bintou’s sister is visiting from France, so it’s a rather full house (even allowing a brief visit with Djibril Dicko, former guitarist for Ensemble National de Mali). We record a few songs during throughout the afternoon, between a heaping meal of rice and peanut sauce, Jah playing two of his homemade Ngonis as well as the guitar.

Jah prefers to live here outside the city — even with the understanding that the life of musician is tethered to the bustle of Bamako. In this simple house with no electricity, the only sound outside is the wind in the trees, the call of a bird. In 2009, musician Brad Loving stayed with the couple for a month. A close friend of the two, he recorded their first international album, the stirring and melancholy Wassoulou music from the South — now available via bandcamp:

big ups to freelance South African based Kyle Mijlof for his photographs of Jah and Bintou — see more at his site.

the importance of a skypager.

of love and eyebrows