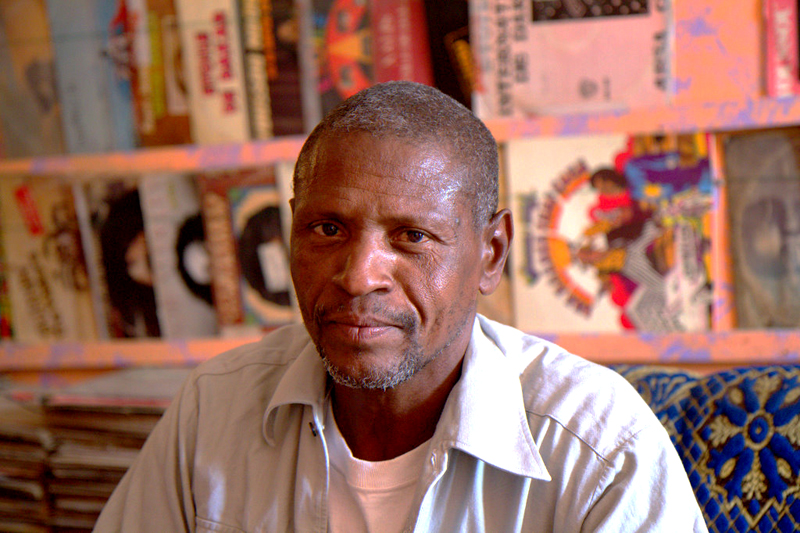 Ahmed Vall operates a small record store in Nouakchott, Mauritania. It’s called the “Saphire D’Or”, but there’s no sign, and the name isn’t displayed anywhere — save the records themselves, a faded stamp amidst the mold eaten, dusty stacks. A pair of double metal doors exit the blinding, exhaust choked streets of the capital, the taxis and foot traffic, the blaring horns, for the cavernous dark shop. Records line the walls, faded jackets, a collectors treasure – ancient Senegalese Salsa bands from Dakar, ephemeral Malan Kora, fuzzy guitar Mauritanian 7″s. This is old music, but in the Saphire D’Or, the grooves speak not of rarity or obscurity, but of nostalgia and youth.

After the first few hours of sunlight have awakened the city, Ahmed spends the day in his store accompanied by a regular crew of friends. Like the records, these friends who pass by throughout the day, sitting at the plush chairs and drinking tea or lounging on a couch behind the counter have been together since childhood. Ahmed was born in Nema, far in the East, when it took six days travel to the capital. But he eventually settled in Nouakchott, like most who fled the drought and hardships of the countryside, opening his record store in 1979. Not content with simply selling records, Ahmed was also one of the first DJs. With a steady supply of music from Mali and Senegal, Ahmed animated the dances and soirees of the young city at places like the Maison de Jeune, Hotel Palmeri, and Hotel Chinguetti. 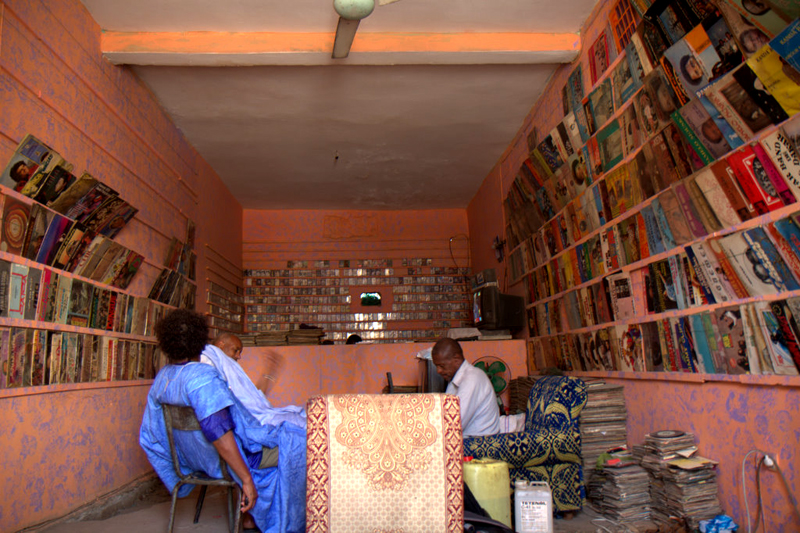 The town has grown since 1979. The store (music vendors are known as “standards” here) sits in Medina Trois, once the edge of a town that has since engulfed it. And no one buys records anymore. Like most record stores in West Africa, they are not even for sale. Since the advent of cassette recording Ahmed has made his living making dubs of records or selling mixtapes. Those seeking, for example, a Star Band record can come to the shop, find a record, and place an order. Later that day, for a meager 500 Ougiya (or roughly 3 dollars), a cassette will be waiting.

But recently, even the cassette market is waning. Ahmed has bought a computer and a few portable hard drives. More customers are arriving with memory cards in hand. And the most enthusiastic clients, the taxi drivers, running into the store with battered vehicles idling out front, have almost unilaterally switched from cassettes to USB FM transmitters — small portable hard drives that power into cigarette lighters and broadcast on a short range FM signal. Ahmed is well prepared, and recently purchased turntables that have USB ports and can record directly to digital. 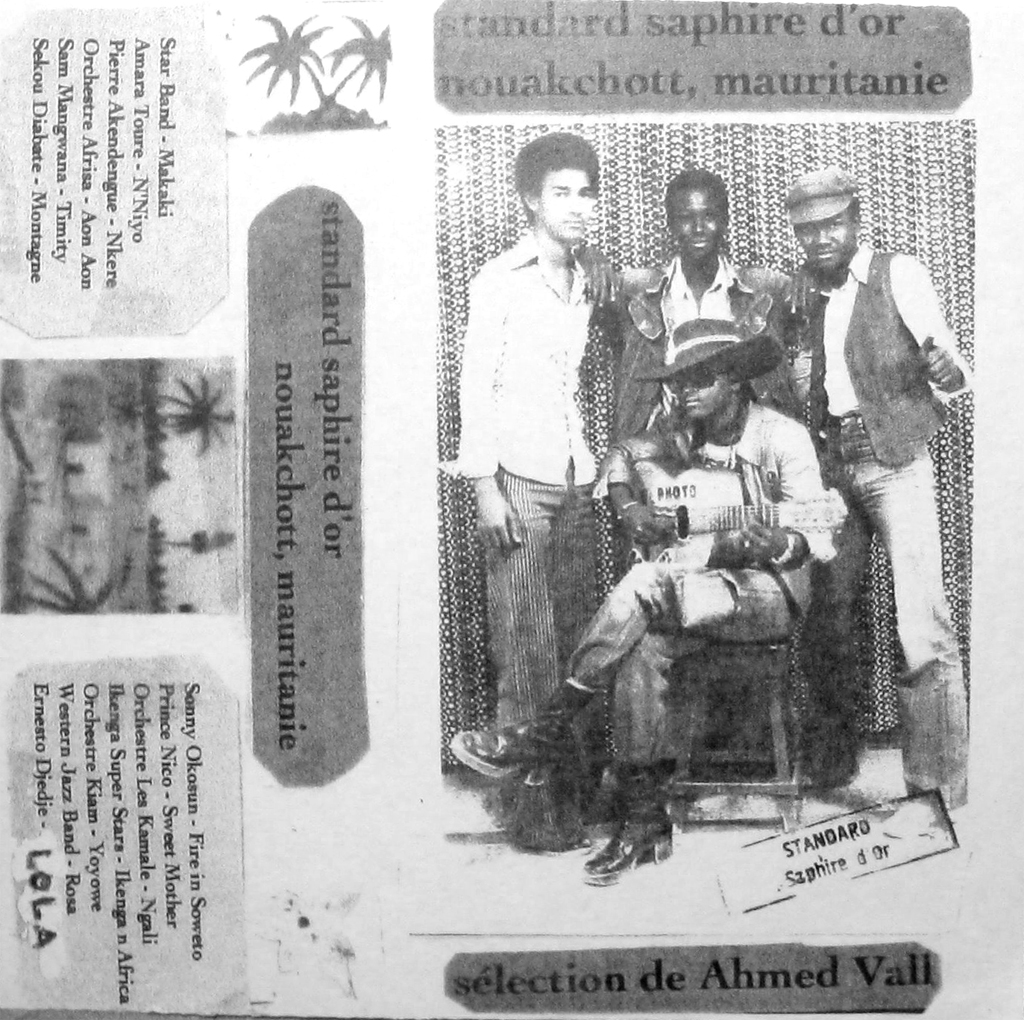 On a recent journey, I asked Ahmed to make me a custom mix tape. We shuffled through piles of old Zaire 45s, Nigerian funk LPs, and Dakar Salsa, picking out some of his favorite tracks. The cover photo was taken at “Mondiale Photo”, one of Nouakchott’s still functioning portrait studios. It’s of Ahmed Vall (with the guitar) and his friends in the Nouakchott of 1979, a time never too distant in the Saphire D’Or. 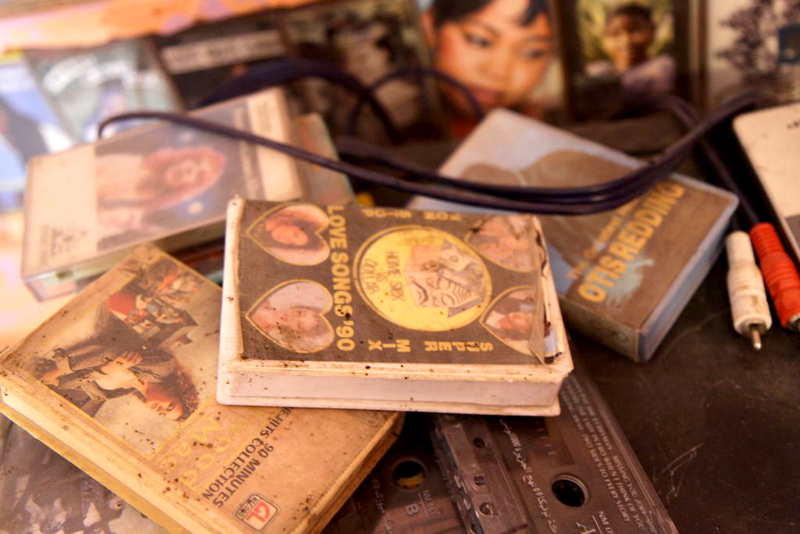