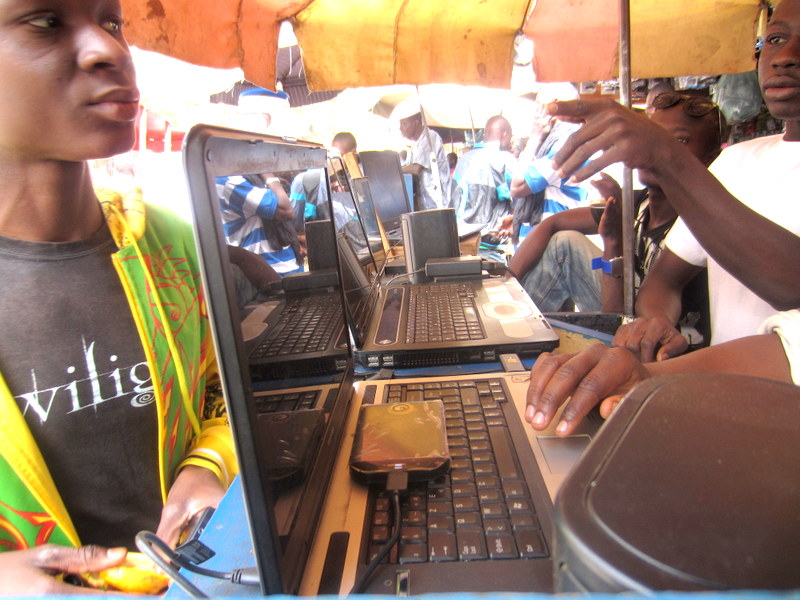 If you want to buy mp3s in any West African city, you first must find the cellphone market. The main hub of cellphones, used, new, real, and knockoff, in Bamako is the street next to the Malitel building. Men at laptops line the streetside behind glass display cases of cellphones. And as usual, per a mere 50 CFA per song, you can fill your phone, USB key, or memory card with Bamako’s Top Ten.

It’s also the place that most small time musicians visit when they want to get their sounds out. The younger musicians, particularly bedroom djs and rappers have fully embraced the contemporary technologies and bring their new releases directly to the vendors to ensure distribution and publicity. Radio and television airtime is allotted only to those with resources to pay the “fee” to push the broadcasters to play a song. And as the largest television station is state run, the criticism of authority, inherent as it is to Malian Hip Hop, makes it difficult for certain songs to ever air.

A few of the latest selections:

A bedroom dj remix of Mangala Camara, most likely made with Virtual DJ.

Sidiki Diabate, son of the legendary Toumani Diabate, with an interesting cover of a Phil Collin’s tune. With Kora.

of love and eyebrows