I take a taxi to “Seizieme” — the sixth district. Nouakchott is divided up into neighborhoods, and this is one of the earlier nomenclatures before things got weird. The new suburbs have names like Basra and Falluja, inspired by the affinity for Arabic satellite TV channels. Seizieme is not far from the capital, but there is more spacing between houses, wider streets and more sand. More room for the wind to blow in off the sea.

I meet Max next to the “third water post” (everything in the neighborhood is designated by water stations, there are no central lines). He’s the percussionist of the group, wearing a signature knit cap, an embossed photo of a Marabout dangling around his neck. A tall smiling kid, much younger than his height suggests. We walk around the corner and between the clusters of houses where children are playing soccer, kicking a ragged ball between makeshift goals of two hunks of concrete, deftly placed. He leads me to the band’s rehearsal space — a squat concrete room. The walls are covered in blackboards, the floor a musty carpet. The walls are likewise covered in variations of Pulaar phrases, haphazardly scrawled in orange and green marker. One of the band members uses this space as a school — for transliteration of Pulaar language, apparently. There are two portable amps, for the guitar and the vocals, and two drums, the large djembe with four metal pieces on the periphery, and a smaller drum played with a hand and stick. The latter is lifted and rests on a partially crushed yellow plastic water bidon, the ubiquitous multi-function tool, to carry water, to sit, apparently as a drum stop. 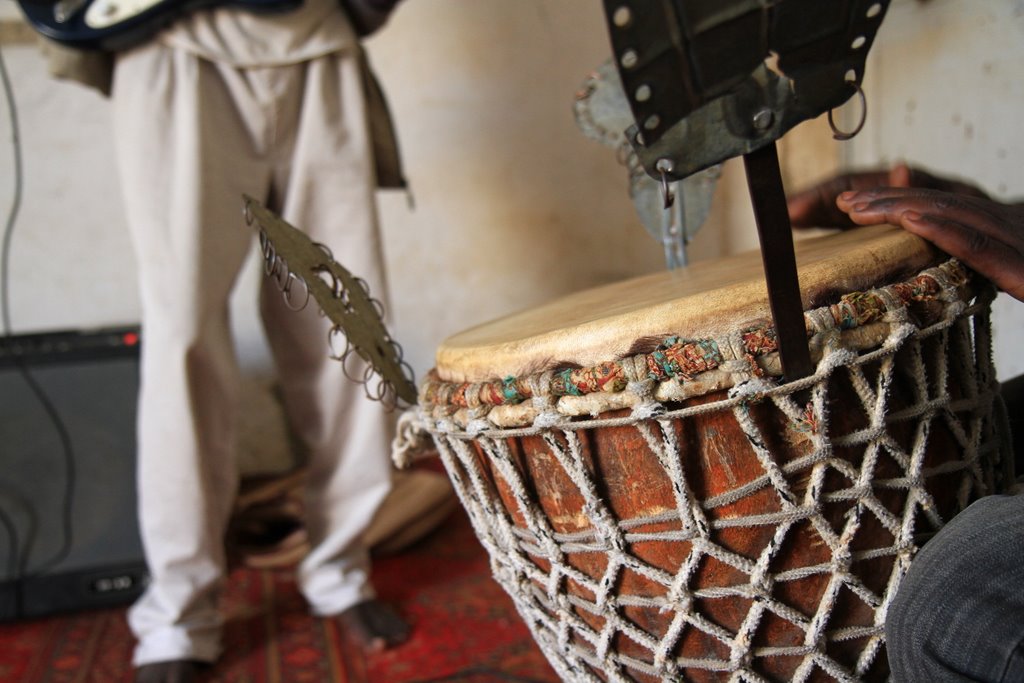 They launch into the repetition without hesitation. The volume is crushing, maxed out in the typical fashion where each element of the orchestra is attempting to fight for sonic dominance. The crackling, clipped vocals are belted out by the lead vocalist, a young Pulaar kid with dreadlocks and features not unlike the great star Baba Maal. Though his vocal styles don’t stray far from the melodies of the aforementioned predecessor, the energy is pure mbalax, the clatter of the drums bouncing throughout the concrete chamber, until even the echoes are drowned out, washing over every audible frequency. With the blue walls and the flooded sound, it feels like the room is closed, filled like a tank. It is “river” blues after all, which at its heart is never far from Fouta, and at least the memory of seasonal floods.

The group is called Yonta Hande — Pulaar for “New Generation” — and it’s a collective that extends beyond something as simple as music. In their words, “A new project concerned with the new generation for development…” Not just a music group, but also a collective of theater performers and educators.

I leave the compound after recording their repertoire — I’ll burn their music on CD for the group afterward, getting recordings in a method that is immediately beneficial to both parties. When I walk out the door, I hear the muted amps blasting through the wall and into the street, as does much of the neighborhood. The sound in the dark street is encouraging, if not for the education of the youth and much-touted concepts that seem to get lose efficacy in their repetition, but for something more simple and immediate — the promotion of the act of creation. And that as long as that is kept alive and people are doing something and saying something, the voices will flood out the city and maybe leave fertile ground for the next crop.