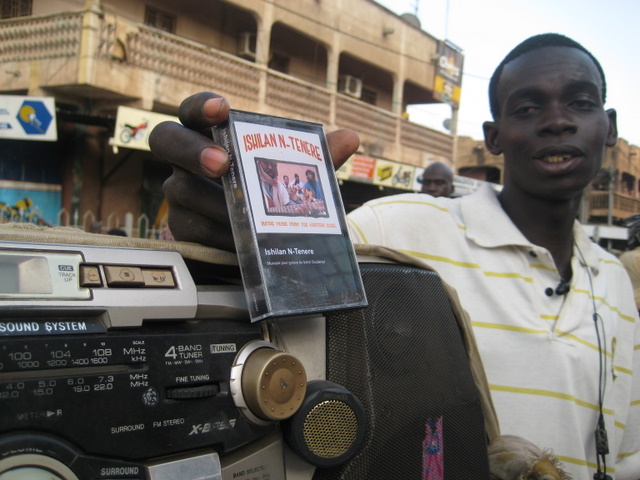 Ishilan n Tenere has had its “official” African release — a limited run of 100 cassettes produced with the crew from Mississippi Records, for African export only. Considering the conditions of the Sahel, with suffocating midday heat, corrosive sand, and the destructive hands of little children, the cassette seemed the appropriate medium, as a souvenir and keepsake for the featured artists and as a strange artifact to drop into the African data stream. Hopefully the album will enjoy some notoriety in its distribution from Senegal to the North of Mali amongst bootleggers, radio stations, taxi drivers, chauffeurs, and even military police — the latter a bribe to permit forward travel in the shadowy threat of Al-Qaedi.

The cassette market, while not quite what it once was, is still active and turning a profit, however meager. In the cramped market streets of downtown Bamako, the humidity and the pollution hangs in the air like a damp rag. All available occupied space, every square meter packed with the charge of capitalism. The most common music vendor sells music in a pushcart, rolling down a street against an oncoming stream of rusted green SOTRAMA minibusses swerving by. The wooden carts are mounted with ragged stereo boom-boxes in constant rotation churning out duplicates and blaring amplified sound in advertisement. “The business isn’t like before,” Arouna, a vendor from Burkina explains. “Everyone is using memory cards, USB keys…” He assures me he will duplicate the cassette to the best of his ability.

One of the results of the digital bootlegging, especially as the price approaches free (individual mp3s sold from a market stall catch about 50 CFA, or $0.10) is a Darwinian replication of the most popular sounds, with no marketing or central point of distribution but the literal peer to peer networks — and a real dissolution of boundaries, physical and virtual. For example, arriving in Goundam to give a copy of Ishilan to Abba Gargando, we find that he already has a copy of his song. Someone had transferred it to his cellphone after downloading it from this website.