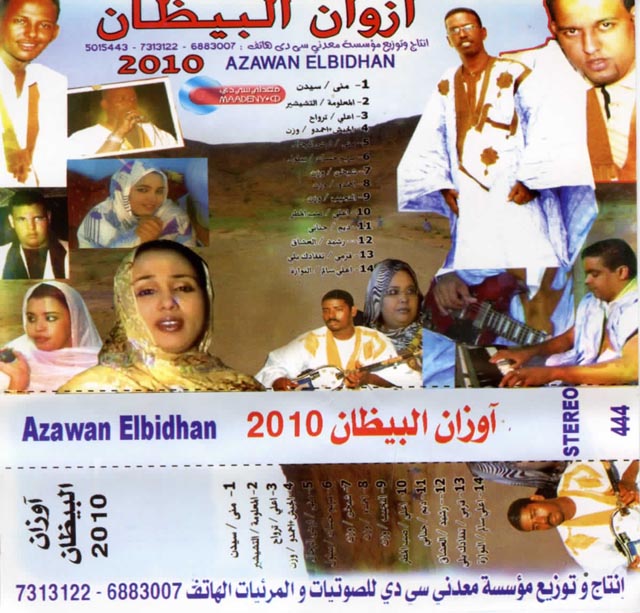 The headquarters of Maadeny CD are in a tiny store along car choked road just next to the capital. In appearances, it’s hardly different from any of the other “standards” throughout the city — closet sized boutiques selling cassettes and cds. The wall is lined with wooden shelves of cassettes, photoshopped montages of the countries most popular griots poorly cropped and scattered onto a generic desert background. There’s something beautiful about the design, the juxtaposition of heavily pixelated google image search results and the over saturated lens flares and text renders. The aesthetic is like an Al-Jazeera advertisement, the popular glittering exuberance of the Moroccan style salon. And it’s in the music too — this slick synthesizer, the Yamaha programmed rhythms, the underwater phased guitar, and the operatic voices that tremble at raised timbres in competition.

Careers are launched and fame is generated through these semi-official trade of cassette mixtape/compilations known as “selections”. While the major part of musical performance still takes place at weddings, baptisms, and private invitations, these compilations are the bulk of recorded music. The worth of a certain griot, their asking price, fluctuates with their popularity, and their popularity exists because of the cassettes. Combined with the lack of intellectual copyright in Mauritania, the cassette distributors operate in a quasi-legal state that is neither contested nor supported by the griots. 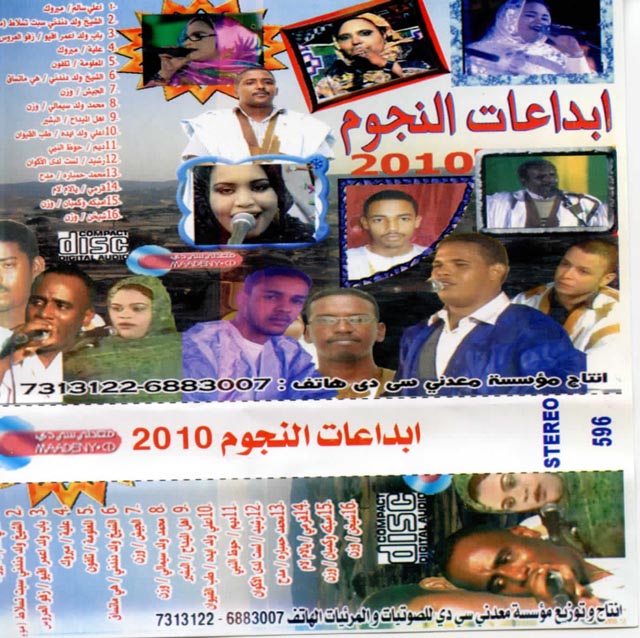 Maadeny CD may not be the biggest producer/distributor of cassettes, but it is the most recognizable for the audio watermark that is inserted into every track that passes through it’s computer. Whatever subsequent route the song might take as it’s transferred to digital, to cellphone, to mp3, even to other cassette manufacturers and distributors — all will carry an advertisement and trademark. But while Maadeny CD may mark the songs, they are not always the producer. More often, the songs are simply marked and released. update from Tony — Maadeny CD makes videos too!)

In a lot of ways, it’s reminiscent of hip hop mixtape culture with the informal market and the constant dj shoutouts dubbed over the tracks. Except that this isn’t some subculture or ancillary market — but in effect, this is the music industry of Mauritania and the only channel of distribution. It’s a free for all industry of visual remixing and open source copying. And there is no central archive for the cassettes or recordings, such that most of the artists couldn’t even begin to collect everything on which they are featured (the bulk of the recordings are either live, wedding recordings, or cassettes “on-demand” for paying patrons). It’s a sound that exists in the moment, the music of Nouakchott, making it both temporal and ephemeral like the city itself — a Mauritanian lovesong that fills the street, blasting out over the horns and exhaust of the market in the sweltering day and gliding over the half constructed rooftops by phantom gusts at night.