Blinding headlights streak by, headed South towards the river, towards Senegal. A cold wind blows. I’m waiting amongst the broken down husks of cars, intermittently illuminated to reveal oil stained sand, discarded pieces of automobiles, and plastic refuse dancing in the dark. My phone buzzes, a figure across the highway waves.

It’s Friday night, the second evening of the Mauritanian weekend, and a popular night for weddings. I’ve been invited to the edge of the town by Nouh, one of Nouakchott’s “animators”, the equivalent of the wedding dj/soundboy of the wedding scene. He leads me through a maze of darkened sand streets, an un-electrified suburb, before we come upon the bright lights and the rumbling of a generator. A white canvas tent has been assembled. Like most things here, the outside is drab and unassuming, but the interior is lavish — the psychedelic underside of the tent fabric, a patchwork of Chinese and African motifs, the intricate oriental carpets, and the women themselves, draped in the mellafa’s of vibrant pastels and shimmering aquamarines. 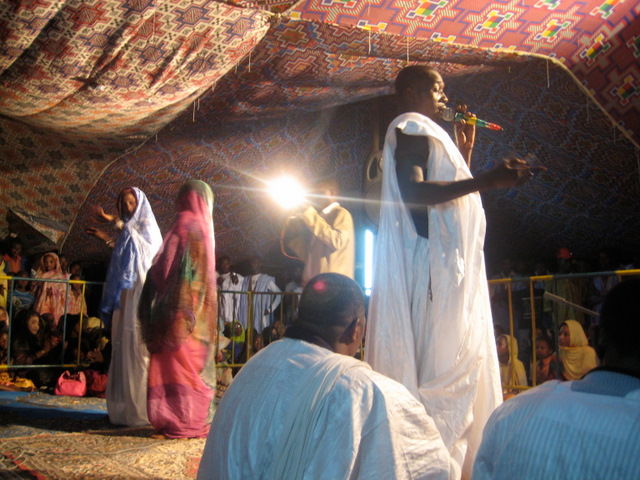 Nouh is one of the most popular animators for Haratine weddings. In the multi-ethnic, non-pluralistic society of modern Nouakchott, segregation by language and identity is visible, particularly in in the differences of musical form. But if there is a commonality across the modern Nouakchott, it is the role of popular performance is still tied to the celebratory festivities — most often, the baptism or the wedding. “Traditional” in mode, this is where the real earning potential lies.

“I quit school when I was 15 — I’ve been doing this ever since. I’m always busy,” Nouh explains. He’s wearing a pristine new Dolce Gabana shirt (of dubious origin) and newly pressed jeans. We sit before the Behringer mixing table. He plugs in a USB key to the DVD player, playing a selection of pre-wedding music. Wires have been cut and spliced together, jacks bricolaged together in typical ingenuity. “I’ve got three amps — the mixing table, the amp, and the pre-amps on the speakers. Have you ever seen anything like this?” he laughs. A camera man arrives in a beige suit with an antique VHS video camera with mounted light, the cable spooled and attached to his belt. The musicians stagger in, young men in large white draas, a troupe of percussionists and two tidnit players, a flurry of singers.

After the obligatory sound checks, the mic checks, the tidnit fine tuning, the music begins. Two tbals, the massive semispherical drums found across the desert, are thumped on with outstretched hands while a metal plate is battered with sandals to creates a snare. The microphones clutched close, the vocals are clipped into robotic peaks. The distortion is something almost inseparable from the sound. It’s said the first electrification of wedding music came with the ancient, Jheich Ould Abba, the first person to electrify the tidnit. Even though electrical amps have been here since the late 70s, they play like it’s a competition, forcing the maximum amplitude out of tidnit, drums, and voice. The explosion of sound, the exaggeration and barrage of the senses, the peaking of the voices and the pounding of the drums throws the dancers into a flurry, and women clap forcefully to be heard over the roar. 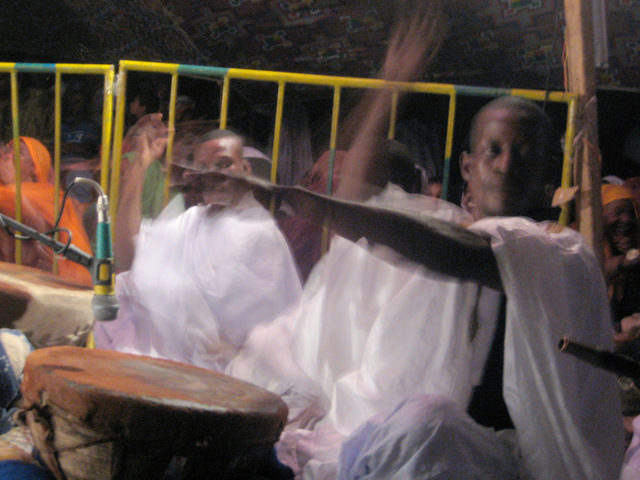 The festivities come to an end when a police officer arrives, as per standard, at midnight. But tonight there is no bribe to be paid, and after 15 minutes the musicians pack up their instruments and distribute the money, and we break down the sound…