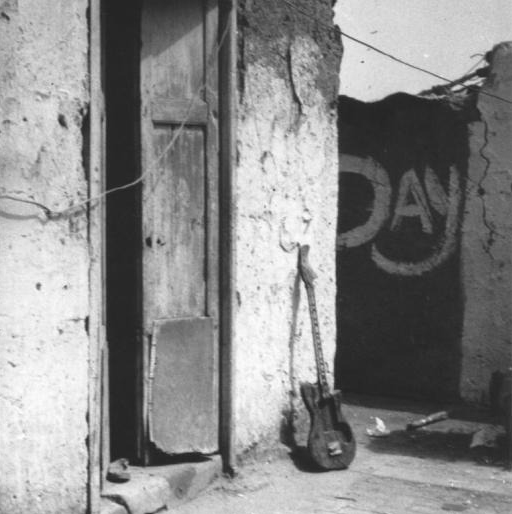 In the late 70s and through the 80s, Peter Verney (of Sudan Update and The Rough Guide to Music of Sudan) lived and worked extensively in Sudan…and happened to record some of the popular musicians at the time.

“Gedaref, Eastern Sudan 1978: Home-made guitar and bass, tea-chest speakers and goatskins on the drumkit – with Hendrix and Santana as their idols, Mohammed Abbas and his two brothers taught themselves, hundreds of miles from the nearest musical equipment shop. Youngest bro’ is 13, and drums like a pro! I strapped on the headphones and recorded them on the fly in the nice acoustics of their mudwalled room. The master tape was stolen – this is a copy from a fake TDK cassette.”

“Nawwal, Lena and the women at Beyt el Mal doing an impromptu run through the daloka songs of the day, in Omdurman, Sudan, just before the overthrow of Numeiri in 1985.”

(for more of his recordings, see Podomatic)

Sudan’s conflict and dissolution/resolution a common story in post colonial Africa, but perhaps even more so when considering the Sahel/Sahara and the drastic cultural differences that lie between North and Sub-Saharan Africa. It’s a story that repeats itself across the band of the Sahel — in the Mauritania-Senegal conflict of 1989, the perpetual Tuareg rebellions, the tenuous state of Chad…though these recordings are mostly from the North around Khartoum. For the new Southern Sudan, I’m apt to turn to youtube and let rapper Queen Zee explain: