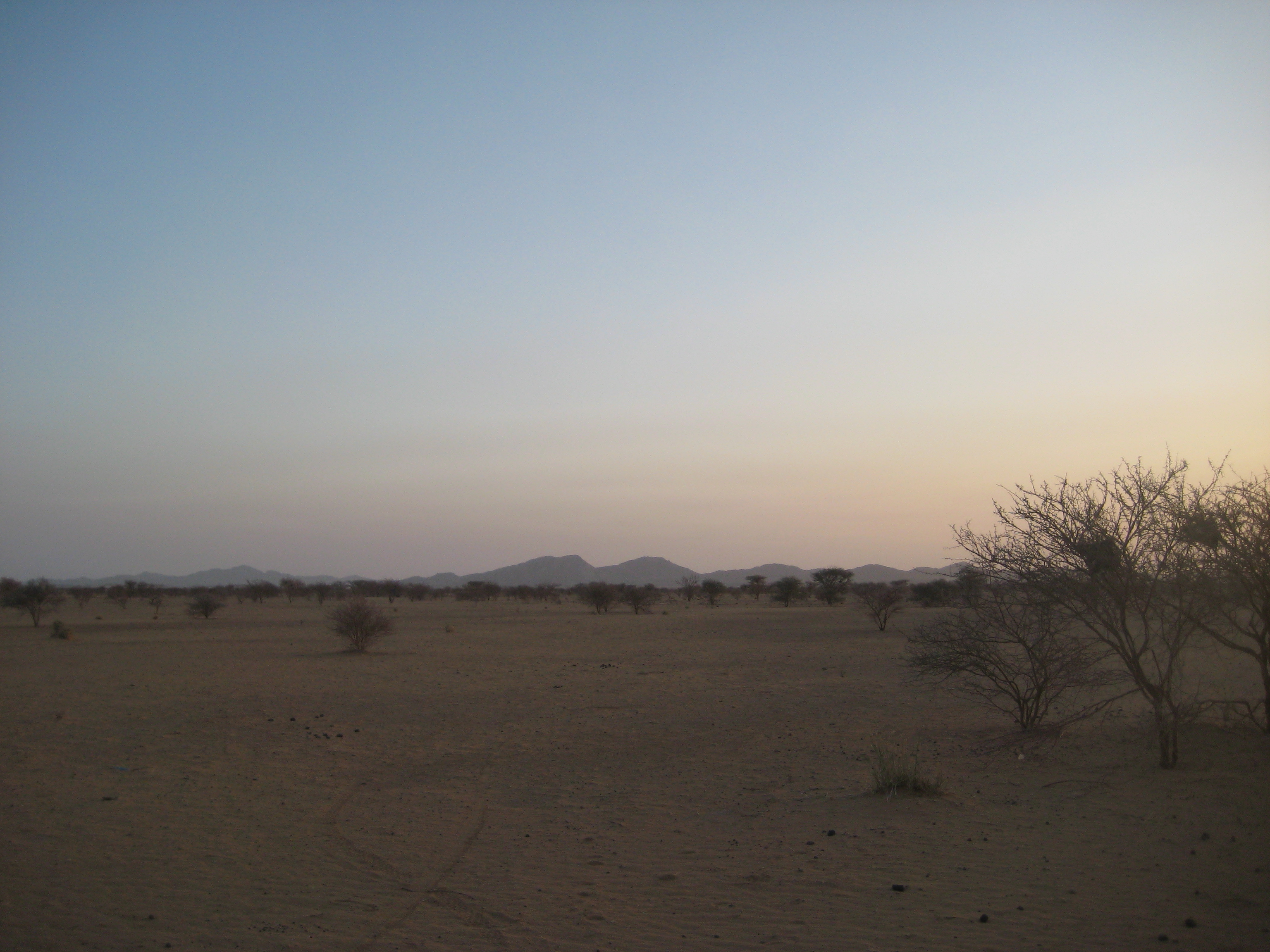 Imagine the brousse like a rich tapestry laid out over the desert. This is not the empty desert of bleached sand, the “tilemsi” as it is called in Tamashek, not the vast stretch wasteland where no plant grows, not the sea of alternating sand dunes and lush green date palm oases. The desert is not even called desert by the inhabitants, but “brousse” (or bush). It is an area where grass abounds in after the rains, where spindly trees disguise the tents, where craggy rock mountains peak over the horizon.

The brousse is thickly inhabited. Each section has a name and a history. The people are mobile, like all nomads, but not overly so. There’s water in the rainy season, and forgiving the years of drought, enough pasturage to support goats, mutton, and cows.

One of the trees that one associates with the brousse is the acacia (“tamat”), a thin twisty tree of numerous white nail-like spines. The tree also bears litte yellow flowers that are fed to the young goats. The sap, tinhoost, is picked off in the dry season and eaten like candy. The root of the acacia is used to make the Tuareg flute. The difficult part is finding a section of straight root. The piece is placed into the sand over which a fire has been blazing. The heat seperates the outside bark from the center wood, and after substantial twisting, the outer layer of wood is pulled free. Holes are cut along the shaft. The inner wood is reserved to store the flute, which is quite fragile, being only the outer bark of root.

The Tamashek flute is known as the “ta-kha-nit”. It’s a transverse flute, similar to the flute found in Mauritania and Senegal (and across the Sahel). Traditionally the flute is associated with herders, those with an ample amount of time, tramping around the brousse with their sheep and goats. Today it is still a common brousse instrument, something to play with friends in the evening.

“This is a song for a man named Harim Batem. It’s a type of song called “tar-li-lit”, a type of praising poetry made in honor of someone. Harim Batem was a man from a long time ago. He was a ‘broussiere’, not a warrior. It’s not always war here. He was someone who was strong and brave, he could do any type of work assigned to him. He was popular with the women…well, it’s the women who write the poetry after all…”

“This is a song that tells the story of a herder who went out the pasture, and one of his cows had an accident and broke his leg. All the cows left, but the other cow remained, trying to limp along to follow the others home. Sometimes the music is fast, then slow, and sometimes it stops. This is the creation of the song, the story of the cow.” 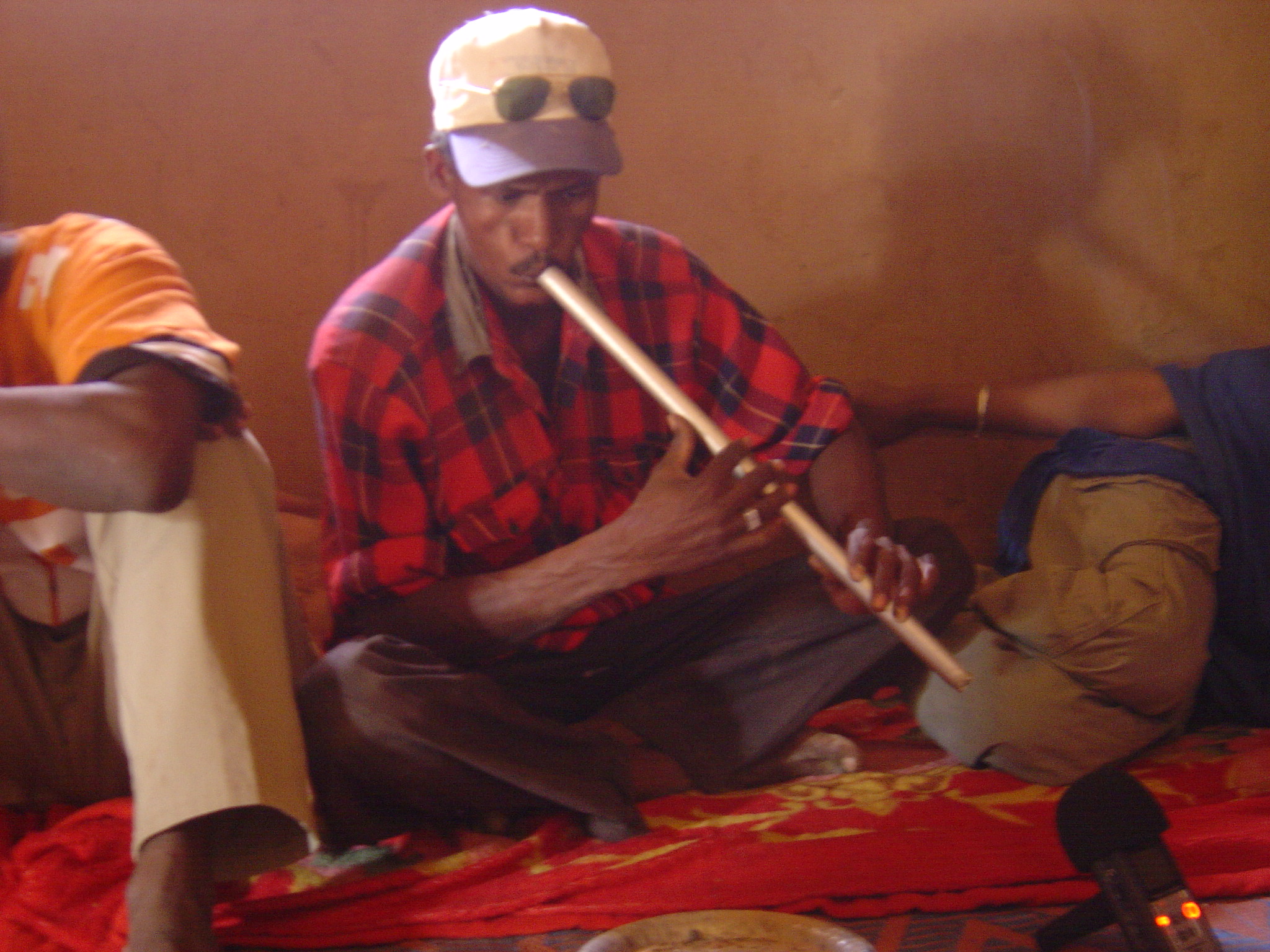 The flute is made from the desert. And it invites one to imagine the low wistful hum as the brousse itself, the wind whistling through the acacia. In the evening at the camp in Djounhan, not an hours travel from Kidal ville but already a world apart, the sun is setting. The children gather the animals, tying up the young camels. The girls wander amongst the trees, looking for firewood. The sun descends into the band of dusty horizon and a cool wind blows.