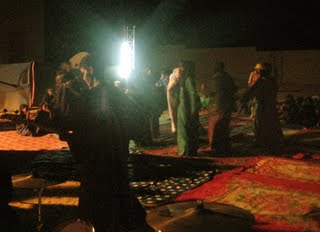 The guitar soiree is the quintessential to the modern Tamashek. At least a few times in a week a festival will be organized — be it a marriage, a baptism, or simply a concert. As the first stars appear in the sky, the guitar can be heard wafting over the city. “Listen…” heads tilt, to ascertain the sound. “Radio? No, definitely guitar…”

The guests, the women in glittering shawls, the young men in new turbans and sporting leather jackets assemble on the ornate rugs on opposing sides. In the center lies a section a few meters squared. This is the dance floor. The first group is announced over the microphone to come forward as the band strikes a few chords, and groups of men rush forward. There is usually disagreement, as six young men stubbornly claim their place. “Three people only, please,” the announcer begs. The band waits patiently for concession. “Merci,” the announcer sighs, and the music begins. There is some bustle in the crowd of women before a few jump up. The dance is a simple two step from side to side, although it occurs on a counter beat, and the dancers dance in place, facing one another yet separated by a good meter, moving their arms about in striking poses. At some point in the song, the refrain, both sides step forward and and dance close to one another, before passing and changing sides on the square. The music ends, the six dancers rush back to their places.

Group Amanar at a small concert in Essouk.
(myspace link)

The guitar soiree is the forum for Tamashek guitar music. It’s rather non participatory — after all, everyone wants to dance — but it is just as much an opportunity to be seen. The first guitar soirees came in the 1990s. Prior to that the guitar cassettes were more likely to be heard blaring throughout the speakers in Libyan military camps.

In some ways, the precedent of the guitar could be seen as the tahardint, the traditional guitar, and the takamba. The takamba is a style of tahardint with a distinctive rhythm pounded on a calabas. It is a fast sound and paradoxically a painfully slow dance. The format of the soirees are similar, but the dancing is slower, ghostly, and more eloquent.

Yet the music that probably comes closest to the guitar is iswatt. Iswatt incidentally is a non instrumental music. The sound is created by a rhythmic clapping accompanied by foot stomping, a constant low frequency male humming and grunts, and a female singing (“the five instruments of iswatt,” a friend proclaims). The crowd forms a circle and pairs of dancers enter amidst the energetic hand clapping. The dancing is fast, arms flailing, dust raising, and with billowing robes. The dancers drop to the ground and jump into the air.

If the guitar is the music of ville, isawatt, even today, continues to be a music of the brousse. In the rainy season, a few people will sneak away into the darkness, far away from the tents and begin singing. The others will hear and come together, following the echoes through the dark night. In that way at least, things are not so different. Well – maybe a little. As the Tamashek saying regarding issawat “Sin, Sin, Keratd Warhein” translates: “Two by Two, Three is Sick”. Or in other words, “two pairs at a time.”