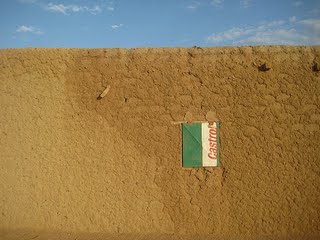 The Tuaregs consist of a variety of tribes, stretching across the center of the Saharan desert, East of Mauritania, across Mali, Algeria, Niger, Libya. In the past, the Western association was with “blue men” in the desert, the fierce resistance to colonization, the romantic myth of the desert nomad. Today it is impossible for the West to speak of Tuareg without the obligatory reference to the Tuareg guitar.

The Tamashek guitar, or “ishumar” (A French deriviation of chomeur, or “unemployed”) was borne in the rebellion. After the first rebellion, the youth that had left for Libya for military training in the war with Chad returned to Mali — without any education or opportunity. 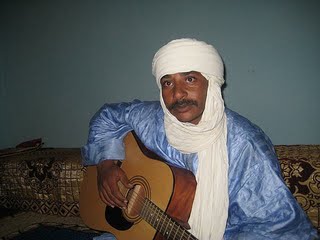 Origins are difficult to ascertain, but Tinariwen of Tessalit, Mali are popularly considered the pioneers. The music of Tinariwen is traded across Mali, via the Tamashek. Numbering only 600,000 but stretching over thousands of kilometers — the Malian Tamashek community is like a small town, and everyone knows everyone. But the heart is definitely in the North of the country.

Ishumar guitar music is preferably played with the electric guitar (for its responsive touch, both solo and rhythm) bass, percussion (calabas, djembe, or drum kit), and singing and hand claps. It is almost always played in a pentatonic scale (familiar immediately for the “blues” component), with a droning bass note and syncopated treble that accompanies the singing. One chord is often sufficient. but with tremolos and impressive solos. A friend remarks that tremolo of “false” notes are what separate Tamashek guitar from Sonrai guitar. “It plays better with the way they speak.” And certainly, the language Tamashek is full of bent and ululated vowels, placing it closer to Arabic in sound then with its cousins to the South. While the music has certain roots in traditional Tamashek guitar, the influence of Western music (cassettes of Bob Marley and Jimmy Hendrix most substantially) cannot be ignored. And today, as is common throughout the Sahara, the favorite guitarist amongst the younger generation: Dire Straits. 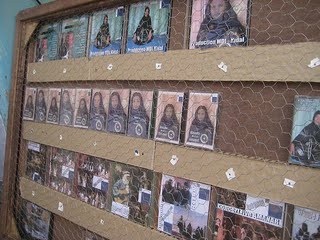 Talking with a former rebel/musician: “Dire Straits is the number one guitarist for the Tamashek. If he held a concert here…no…all the Tuareg – Algeria, Libya, Niger – would come to Kidal.” Mark Knopfler, are you listening?

Dire Straits in the Sahara