En route to Timbouctou, I stop over in Goundam, a nondescript village of the Niger Delta. As I travel with guitar, a young man stops me and asks if he can have a look in the case. “Moi, aussi, je suis un artiste…” His name is Babah Dire (from the town Dire), a recorded artist with a few cassettes and a regular at Essakane, and I shoot the preceding video.

The style of guitar is that which is popularized by Ali Farka Toure; what can be called the Sonrai (or Songhai) folk.* Notably for it’s blues sound, the ever present pentatonic scale, and strong punctuated notes (there are none of the tremolos or false notes as in Tamashek guitar). But it would be difficult to pigeonhole the music. Authenticity is for idealists.

Outside “Obama’s” botique in Niafounke, a guitarist demonstrates the Sonrai folklore.

Souleyman – A song in the Bambara scale 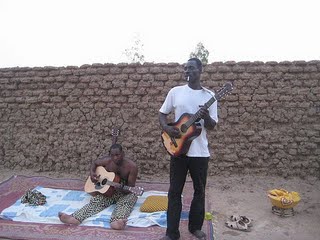 The village of Tonka lies between Niafounke and Timbouctou, on the bank of the River Niger. It is an exceptionally green place, and exudes a certain friendliness which maybe has something to do with lack of tourism. I spend a few days with a group called Horostar de Tonka, three chauffeurs who when they’re not crisscrossing Northern Mali, retreat to the edge of town and play guitar until the late dark hours (there is no electricity in Tonka, a missed blessing?). 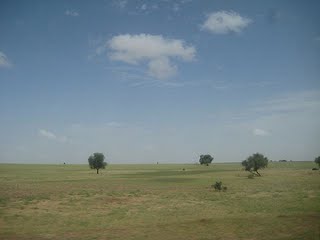 Alkibar Gignor of Niafounke (previously here) produces a funky interpretation of Sonrai guitar. The following tracks are from a night rehearsal at the Ali Farka Hotel – including lots of dancing, which the microphone may have failed to capture. Imagination required.

* In local usage, Sonrai refers to the language/culture in Timbouctou and its environs, Songhai for Gao.

kickstarters for vinyl of music from saharan cellphones

in this case, we lute for ears