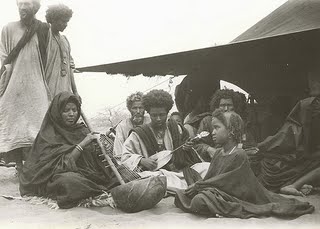 While Tuareg rock (Desert Blues, i.e. Tinariwen) is the most known form of Tamashek music abroad, traditional guitar still has a strong place in the North. The traditional guitar is found throughout West Africa, for Peuls, Sonrai, Maures, Tuareg, Sarakoles – respectively named Hodou, Koubour, Tidinit, Teherdent or Hardine (and a four stringed version known as Gambare or Jeli Ngoni for the Bambara).

There are two sizes of the guitar; both are the same form – a three stringed lute of wood hollow body. The guitar is fretless, and the strings are bound to the neck by a wrapped bands of elastic. The larger, with a deeper resonance, is used for “listening” while the smaller, with a brighter and tinnier sound embodies a more lively sound, suitable for dancing. Amplification is achieved with the standard microphone of West Africa – a transducer microphone furnished from the Casio watch. The guitarist sits with a knee bent the guitar held between the legs, a seemingly acrobatic position (photo needed!).

Ali Ag Mooman is a griot from Timbouctou. While the griots still hold a strong role in society (no marriage would be possible without one), they are often marginalized in the market. The traditional music is not sought after with the fervor as the modern sounds.

Ali plays some songs while his brother explains (in French, translations below).

“This is in the desert, there is a group of guitarists that had lost their route, and they played this song for 20 days. Adernibah in Tamashek is people who are lost in the desert. It is a song known in the entire world.”

“This is the first song of the Tuareg. It’s called “Yona”. The beginning of the (Tuareg) guitar, this is it!”

“This is from a grand leader, called Hawadine.”

“This is called y’addi. This is the song uniquely for the Tuareg. If there is a war, this song is played. It’s like a drug, this song, and if they hear it they march straight!”

Lastly, a recording of Ali Ag Mooma (thardint), Moussa (Calabass), and myself (guitar) in an evening soiree/cassette recording, performed at his house by the “Gare Goundam.” As the night progresses, all the neighbors trickle in, drawn by the buzzing of the guitar – the best promotion, and how most soirees are “advertised” in the desert towns and the nomad ‘acampaments.’

This is a popular song titled Chebibah, which means “the youth” in Arabic. It was originally composed by an Algerian, but is a standard for Tamashek guitar.