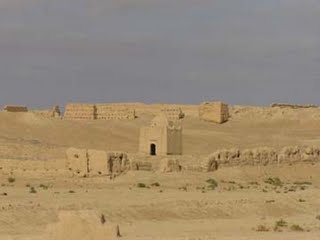 They said ‘we behold you as one diligent in your pursuit of much journeying,
On the earth. For a while you stay, and then you journey on your way.’
I said, ‘Were there no benefit to be gained in travelling,
The sun would not change its stations in its heavenly mansions.’

The Sahara is classically viewed as an impenetrable barrier between North and Central Africa. Classically, or perhaps metaphorically, because it is clearly not the case, and the influences that swept across the sand worked both ways, following the routes of the caravans. Perhaps in no other place is this so evident as in the Saharan music, or that on the edges of the desert, such as the Gnawa (or Gnaoua) music of Southern Morocco.

The Gnawa music possesses a droning rhythm from a luth (haj-hooj), clapping, hand cymbals (krakeb), and the typic call and response singing prevalent. It is not unfair to say the music differs widely from that normally identified as “Moroccan” – and is at once more identifiable with Sonrai (or Songhai) of Northern Mali.

The preceding song was recorded in a village Khamlia (known locally as the “village of the blacks”), 7km south of Merzouga and near the ancient caravan town of Sijilmassa.

*note: due to a short stint in France, the website hasn’t been updated, but i’m currently back in Northern Mali and will updating with renewed frequency as internet permits!*