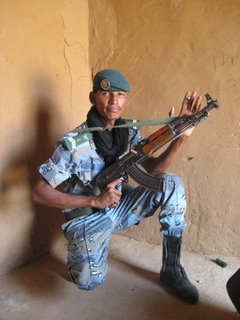 The desert north of the river Niger is a scrubby dry place. Along the border with Mauritanian and Mali, there are a mixture of Maurs, Berbiche, and Tamashek (Tuareg). I meet a group of Kalashnikov carrying youths (military). The zone is in a state of continuous tension, as rebel raids have been frequent and recent as a few months ago. There is a clear division between the Bambara and the Tamashek officers, even though this is likely to be denied.

I stay a few days in Gargando, a tiny and unassuming village, known in the region primarily for it’s brackish water. The youth have come back for vacation. In the late evening, we sit around and play songs on my guitar. 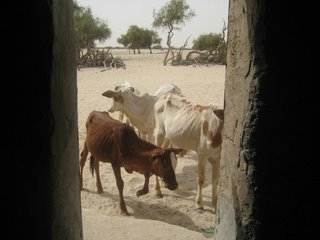 During the day, the heat is too oppressive to move. Later, by the afternoon, there is millet to pound and cows to feed. But there is lot of time to sit around too and play with the microphone.

At night, under the stars, the old bearded patriarch Abdullahi tells me, in a deep cinematic voice: “In America you sleep in five star hotels. Here in the desert, we have a million and one.” And his laugh bellows out over the white sand.

give up the goods (just step)