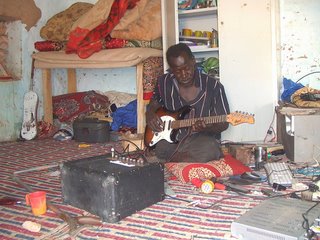 Moudou ould Mattalla is Chinguetti’s most well known musician. Originally from Zourate, on the border with Algeria, he lives in the village and shares his knowledge with whoever is passing through. He released a CD that is sold in France, that was recorded in his home. In his “music room,” the walls are literally covered with pen markings, the different tunings and scales corresponding to each mode of Mauritanian music.

Ambient recordings from a party

Ahmed Imbend is a talented self taught musician. “My first guitar, I made when I was a kid. It had one string. Eventually, I got bored, and added another string. I just kept adding strings.”

Today, he plays an old student sized Spanish guitar. In the typical DIY fashion, one of the strings is made from a bicycle cable, the transducer pickup is from a telephone, and the amplifier is a stereo with it’s leads spliced. He plays with an alternate tuning (E-Ab-Db-E-Ab-Db) that owes a great deal to the tidnit.

Lastly, at an Auberge in the old city across the wadi, a woman’s group is assembled and singing for a group of French tourists.

the importance of a skypager.