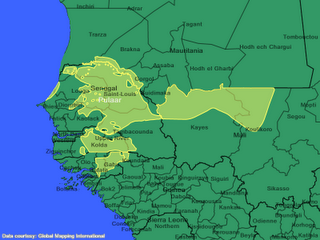 The Peuls are group of historically pastoral people stretching from the Senegal to Cameroon. But the Pulaar culture in Mauritanian is distinctly that of the Senegalese River that defines the border between the two countries. The music of “le fleuve” has been commercially popularized by Baba Maal, and he has no doubt aided to it’s survival and repetition.

Sall is a folk guitarist – a true folk guitarist. He has no interest in playing concerts, but will gladly pick up the guitar in his salon in the “African quarter” as the array of toddlers wander in and out. He’s often joined in song with his wife, Kumba, or his children, if they can be coerced to sing along. Notice crying infants, bleating goats, and clanking tea glasses (all integral to Mauritanian recordings).

Sall explains the “base” of Peul folk music

Abderahmane Amdou Ba, also known as Daarorgal Fulbe, Pulaar griot, sings in a rehearsal here with backing guitar of Babi (pronounced Bah-bi) Sall and Jawara, of the group Dental, accompanied by the jazz trumpet of Leon Nade, the director of the new music school here in Nouakchott.

Finally, in the spirit of field recordings…a nighttime walk through Cinquieme.